This is not the column I wanted to write. My Dad passed away on Friday, 28 December after fighting Pulmonary Fibrosis for more than a year. The steady decline was painful to watch. The irony is that, unlike most respiratory ailment sufferers, he never smoked. Odd for his generation. He was a WWII vet, managed to earn a Bronze Star and four battle stars on his European Campaign Ribbon, was involved in the Battle of the Bulge and was never wounded, yet couldn’t beat this one. 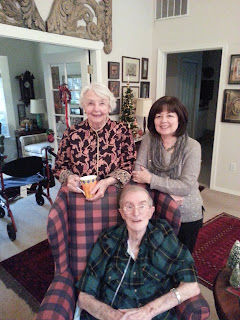 So, why am I dedicating this column to him? Two simple reasons. First, he too was a writer. He earned a degree in Journalism from UC Berkeley and seemed to pass some of his skill with words on to me. Without those skills, I wouldn’t be inflicting my musings on you.
Second, he’s the guy who got me started Road Trippin’. I grew up in the 50s and the Sunday Drive was an institution then. We’d “Go for a Drive”, wander all over, and when the whole family KNEW we were hopelessly lost, there would be Henry’s Rite Spot, Home of Chicken in the Rough, about two blocks from home. Naturally, he never stopped for directions.
We’d make long trips at first from Sacramento to some new place out in the middle of a sea of orange trees called Disneyland, then spend a week at the Balboa Inn, playing SkeeBall and trying like hell to beat my Mom. When we moved down here to Pasadena, we reversed the process to visit my Grandparents in Sacramento for Christmas.
Back then, there was only US 99. The Grapevine had been upgraded from the Spilled Bowl of Pasta of the  original Ridge Route, but still, it took skill and a strong radiator to negotiate it in a 1953 Buick, or later, the ’56 Dodge Two Tone Green Station Wagon. My sister and I would each have our cubbyhole wedged with “stuff”, my little brother would be in one of those loop-over-the-back-of-the-front-seat-car-seats with the plastic steering wheel. The only safety device was Mom’s arm.
Back then, 99 went through the whole litany of California Agricultural Towns. Lodi, Stockton, Modesto (Water, Wealth, Contentment, Heath!), Fresno, Lindsey, Shafter, Pixley, Bakersfield and all the rest. “Progress” was judged by which towns were bypassed when, condemning their Mainstreets to oblivion and creating a tectonic shift of the whole town to center on the offramps.
We only stopped for gas, the cornucopia of the picnic basket and the red plaid thermos bottles all the sustenance we needed. Even my sister learned to “hold it”.
We sang “Ragtime Cowboy Joe” and the “Wiffenpoof Song” because AM radio didn’t reach beyond the towns and only played cowboy music.
We made up a car counting game. Every car we passed, earned us one point. Every car that passed us, lost us a point. Pick ups were worth three points and Big Trucks were valued at five. We’d rack up hundreds of points by the time we got home. My Mom would take her shift at driving too. She’d often rack up more points than Dad.  Neither hung about, the Holy Mantra was “We Gotta Make Time.”
We never went Back East. Never drove Route 66. We were all California bred and raised. All the family was here in NoCal or SoCal, so our orientation was always North-South. The furthest East we’d go was either Riverside to see my Dad’s folks, of Palm Springs to see my Mom’s aunt and uncle.
So, Thanks Dad for setting me off on the Road Trip of Life. I know you’ve finally found a shady rest stop, and are eating where all the truckers eat, ‘casue we all know, that’s where the best food is. 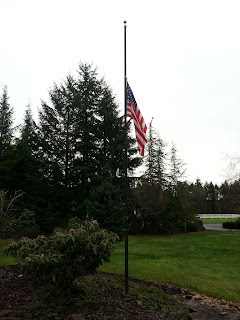 A few years ago, I wrote a column on Road Trip TV, in particular, the show Route 66. I also did one on the best Road Trip Music. So how about Road Trip Movies. I planned a poll on the topic, and in putting it together, I was actually surprised at how long a list it could be. It seems Hollywood figured out early on that Road Trips made for good movies, and most made either good box office or became cult classics. Some managed to be both.
Part of my problem too, was defining what exactly a Road Trip Movie was. Did the Road Trip itself have to be the central theme? Did it have to be by car? Did it have to be only here in the USofA? So, I solved it by simply being arbitrary and picking some of my favorites.
I was a bit surprised at the movies that got no votes. I thought Easy Rider was a shoe in. Same with Thelma and Louise, Zabriske Point, and Smokey and the Bandit. I maybe wasn’t so surprised that Lost in America and The Adventures of Priscilla, Queen of the Desert didn’t get any votes. Still, these non-vote getters are worth seeing.
Obviously, the idea here is to help you with your Christmas Wish List. Or maybe, someone else’s wish list. Some of them are at Autobooks and I’ll bet you Tina will find away to order the others for you. Try her first instead of the Big A. Small business needs more support!
So, what about the winners?
First up is National Lampoon’s Vacation. It’s a 1983 film directed by Harold Ramis, starring Chevy Chase, Beverly D'Angelo, Randy Quaid, Dana Barron and Anthony Michael Hall. There are great cameos by John Candy and Imogene Coca, model Christie Brinkley, and Jane Krakowski. It’s the quintessential cross country trip by the Griswold Family, from Chicago to “Wally World” (a thinly disguised Dizzyland) and Chase is at his bumbling Saturday Night Live best. From getting up sold to the Family Truckster Wagon (a true parody of the pre-SUV station wagon) to the dog on the bumper, it’s one of the funniest movies ever.

Two-Lane Blacktop is a 1971 road movie that was directed by Monte Hellman and starred singer-songwriter James Taylor, Dennis Wilson of the Beach Boys, Warren Oates, and Laurie Bird. It wasn’t a big hit but is still a cult classic. It even inspired Brock Yates to create his Cannonball Baker, Sea to Shining Sea Trophy Dash. Two-Lane Blacktop is notable as a time capsule film of U.S. Route 66 during the pre-Interstate Highway era, and for its stark footage and minimal dialogue. As such, it has become popular with fans of Route 66. Two-Lane Blacktop has been compared to similar road movies with an existentialist message from the era, such as Vanishing Point, Easy Rider, and Electra Glide in Blue. 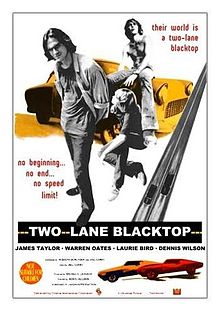 The next vote getter was actually a series. Bob Hope and Bing Crosby teamed up int he 1940s for a string of movies best know as “The Road To” movies. Hope and Crosby team with Dorothy Lamour in what could be formulaic, but actually always entertaining set of hijinx and snappy dialog that is unmatched. The best part is when you understand that much of the repartee was ad libbed on the spot. Drove directors and continuity girls crazy. They are decidedly Must Haves. Here’s a list. I know the first four, and probably the best, are available together as a boxed set.
Road to Singapore (1940)
Road to Zanzibar (1941)
Road to Morocco (1942)
Road to Utopia (1946)
Road to Rio (1947)
Road to Bali (1952)
The Road to Hong Kong (1962)

It Happened One Night is a 1934 romantic/screwball comedy directed by Frank Capra, in which a pampered socialite (Claudette Colbert) tries to get out from under her father's thumb, and falls in love with a roguish reporter (Clark Gable). It was the first, and until recently, the only film to win all four of the top Oscars. Best Picture, Best Director, Best Actor, and Best Actress. It is perhaps Capra at his best.

Back to more modern movies, Planes, Trains and Automobiles, 1987, was written, produced and directed by John Hughs Starring Steve Martin as Neal Page, a high-strung advertising executive, who meets Del Griffith, played by John Candy, a good hearted, eternally optimistic, overly talkative, well-meaning, but clumsy shower curtain ring salesman who seems to live in a world governed by a different set of rules. They share a three-day odyssey of misadventures trying to get Neal home to Chicago from New York City in time for Thanksgiving dinner with his family. The bit with the Polka Band is priceless. So is Candy at his best as the Sad Sack Clown. 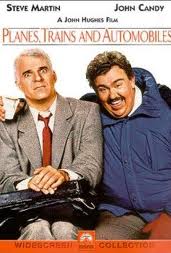 One of the newest in our genre is Little Miss Sunshine, a 2006 American comedy-drama road film, was the directorial film debut of the husband-wife team of Jonathan Dayton and Valerie Faris. The screenplay was written by first-time writer Michael Arndt. The movie stars Greg Kinnear, Steve Carell, Toni Collette, Paul Dano, Abigail Breslin and Alan Arkin,. In it, Sheryl Hoover (Toni Collette) is an overworked mother of two children who lives in Albuquerque, New Mexico. Her brother Frank (Steve Carell) is a gay scholar of French author Marcel Proust, temporarily living at home with the family after a suicide attempt. Her husband Richard (Greg Kinnear) is striving to build a career as a motivational speaker and life coach. Dwayne (Paul Dano), Sheryl's son from a previous marriage, is an unhappy sixteen year old who has taken a vow of silence until he can accomplish his dream of getting into the US Air Force Academy in order to become a test pilot. Richard's foul-mouthed father, Edwin (Alan Arkin), a World War II veteran recently evicted from a retirement home for using heroin, lives with the family. He is close with his seven-year-old granddaughter, Olive (Abigail Breslin).
Little Miss Sunshine received critical acclaimThe film was nominated for four Academy Awards, including Best Picture, and won two: Best Original Screenplay for Michael Arndt and Best Supporting Actor for Alan Arkin. It also won the Independent Spirit Award for Best Feature and received numerous other accolades. 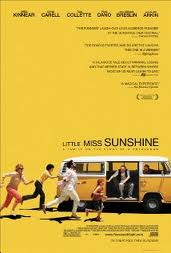 So, there you have it. A list of flix that should keep you warm and inspire you to Hit the Road as soon as the weather will let you.

Posted by stivmac at 8:33 AM No comments: