4300 miles. Eight days of driving. 215 gallons of gas (more or less). Across state borders nine times. Hot. Humid. Chilly. Dry. Thunderstorms. Missed a tornado by a couple of hours. Sea Level to 11,000+feet. Desert. Forest. Ocean. Canyons. Twisty mountain roads. Flat out straight deserted roads. Burgers to Basque food. Family history and current family. Funky motels of questionable provenance. Really nice places to stay. Dragging out of bed a 2:30 AM. Sleeping in until 7AM.
That about sums up this summer’s rather massive undertaking. No, we didn’t take the Blue Meanie, we took the Mustang. I think we should re-name it DDT for all the bugs we killed. About the only constant, other than Marianne, my wife and co-driver for life and all around good sport, was the fantastic scenery. Every day held a wonder filled plethora of scenic wonders. I can’t really pick a favorite place. It was all great. Even the sections of Dreaded Interstate were redeemed by vistas of vast interest. 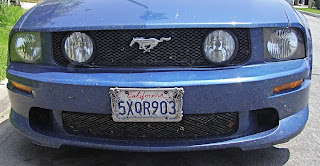 Last month, I discussed how and why we planned this trip, focussing on two main features. A return to Monument Valley, and a search for family history revolving around my great grandfather, Philip Patrick Ready, killed in a 1902 train wreck. So, be prepared to follow our adventures for the next few columns.
The first leg was pretty uneventful. Pretty standard. We left a bit later than usual, having no need for a particularly long day in the saddle, only a touch over 500 miles, and not much in the way of stops. Breakfast in Barstow, as is our routine when heading east, then a quick nosh of lunch (again the usual fare, salami, cheese from our friends at California Wine and Cheese in Monrovia, and garlic french bread) in a rest stop just before Kingman. Finally in Kingman, we could abandon the Interstate for old Route 66. This is (as related a few times before) a nice drive, filled with all the nostalgia and few of the perils of the olden days.
We stopped in Seligman for a look around and visited a few Gifty Shoppies, in particular, Historic Seligman Sundries, an old converted trading post and soda fountain, complete with counter and stools. It’s filled with the stuff you’d expect. We had an interesting chat with the owners, Frank and Lynne about the place and just who they see these days. “Not enough Americans come by. Most of our visitors are French and stop in on a bus tour,” Frank said. “More Americans need to got out and see the country. This is a great country to get out and see, so much variety,” he added. Given that that’s what I’ve been preaching here for how many years now, I’d be tough to disagree. 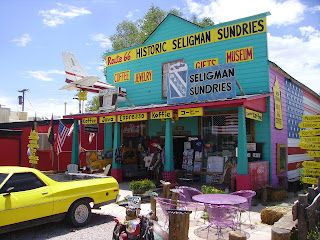 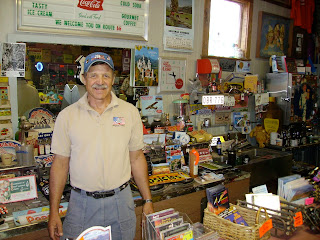 From Seligman we went to Flagstaff and wandered a bit through town. In what has been the typical trend, the old part of Flagstaff has been nicely renovated with plenty of shops and eateries, all oriented to the tourist. Some are tacky as only an American tourist trap can be, some are very nice upscale spots that offer some fine examples of local art. It’s well worth a stop.
Out of Flagstaff we headed north to our first night’s stop, the Cameron Trading Post some fifty miles up US Highway 89. Cameron is in many ways, the gateway to Indian Country. The trading post was established in 1916, it has served both Hopi and Navajo as well as tourists from the earliest days of road travel. It’s also, as constant readers will recall, where there are great deals on turquoise, Marianne’s favorite jewelry. She managed to restrain herself and found a neat pair of earrings. The facilities there are mixed. The rooms are really nice, modern and comfortable,if a bit pricey at about $100/night. The restaurant was a bit of a disappointment. My burger was pretty dry and Marianne’s “Navajo Stew” was kinda bland. What we should have ordered is what they call a “Navajo Taco.” These looked very tasty and one would have fed us both!
Now you have to be asking yourself, how can a taco feed two? Well, when instead of a tortilla, you have a diner plate sized piece of fry bread (wet bread dough spread out and dropped into hot oil) covered with spiced ground beef, a mound of cheese and lettuce and enough guacamole to satisfy even the most ardent avocado aficionado, you get the picture. Several people around us raved about them. We just didn’t see them before we ordered. Now, at least you know what to get. The staff here are all either Navajo or Hopi and are truly wonderful and efficient.
The other great thing about Cameron’s is the canyon in their back yard. The place over looks the Little Colorado River Gorge, and while not as grand as it’s better known big brother, it’s still pretty neat and at sunset, looking off the balcony of your room, it’s spectacular. We hit the sack early because we planned a monster day for the next leg. 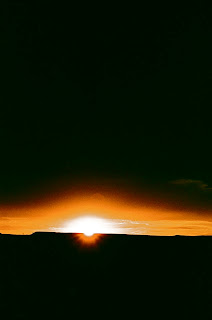 When we last related our travel through the area, we emphasized Monument Valley. And for good reason. I’m not a good enough story teller to give you in mere words what this place is like. I don’t think anyone, short of William Butler Yeats or Walt Whitman is. Maybe not even them. Our plan was to be there at sunrise, and hoped that the usual monsoonal moisture would give us great cloud formations. We weren’t disappointed.
To get there at dawn meant getting up a bit early. It’s almost 120 miles to Monument Valley from Cameron. We could have stayed closer, but Marianne wanted her turquoise fix, so we stayed at Cameron. Lessee now, sunrise was about 6AM, call it two hours of driving, another half hour to find just the right spot. We got up about 2:30, left about 3 and timed it perfectly. We managed to find the spot we’d been to before, maybe the second clump of roadside jewelry stands, set up the tripod, loaded the film and waited for Mother Nature to put on her show. It was Fan-Freakin-Tastic!
Dead quiet, the air was still and warm. The clouds from the previous day’s thunder storms still lingered, brooding, gathering their strength for the light, sound, and water show for later that afternoon. Gradually the sky lightened, changing hue from deep purple to lavender, revealing the ebony silhouettes of the massive volcanic rock formations that define the place. The clouds revealed themselves as textured rolling pillows, letting in gaps of pale light, slightly tinged with yellow. With growing anticipation, we klatched off a few pictures to test the waters. Getting measure of the place. Without warning, BLAM! The sun poked around one of the monoliths, sending out shafts of golden light, searing through the darkness. We scurried to catch this wonderment on film, using the camera’s timers to get as much depth of field as possible. We were torn between just wanting to stand and stare in awe and doing the job at hand, hoping for that perfect shot. 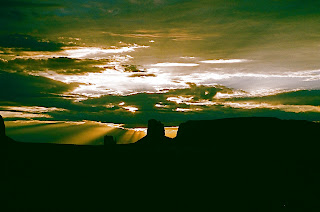 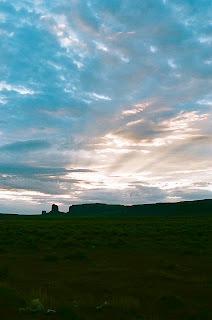 Satiated, we reluctantly packed up, and wanting to head up the road to get some new angles, we sped off into the growing light. A few miles further, more opportunities arose to catch the ever changing hues of black to maroon to red as the rising sun lent texture along with color to the scene that makes the place justifiably famous. We could have lingered all day, and sometime we will, but this trip was just starting, and the Mesa Verde Cliff Dwellings and Durango were still ahead of us. 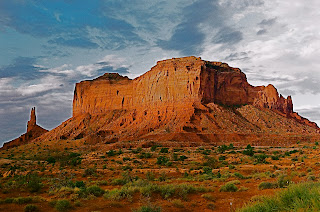 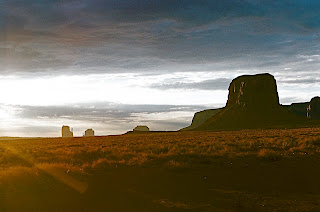 Posted by stivmac at 9:30 AM No comments: