The Great Western States Trek-Part Deux or Let's Do the Time Warp Again!"

Road Trippin’
with Steve McCarthy
The Great Western Trek--Part Deux
Where were we. Ah, yes, as the sun rose higher over Monument Valley, we inched our way along, stopping in wonder as the ever changing landscape awed us with the majesty of it all. This really is one of the most incredible places on earth. Since there was no where to stop for food, we’d brought along our own breakfast of blueberry muffins and other assorted goodies we finally headed towards the Utah town of Mexican Hat.
This little berg is on the San Juan River and looks to be a pretty good place to stay. Judging by the number of motels on the river, I’m betting it’s also a good place for fishing. We’d not tanked up the Mustang since Flagstaff and since Durango was another 150 or so miles, we bit the bullet and added some fuel at the only place in town that seemed open. The road through Mexican Hat (which, by the way gets its name from a neat rock formation that looks like a sombrero and is worth the trip on it’s own) US 160 is a great road. Good combination of twisty bits and open straights to give a good workout to car and driver. Be careful though, each time we’ve been through there, there’s been a local sheriff’s SUV parked near the river as you get into town. Yes, his radar was on, even at 7AM! No, we didn’t get tagged. Anyway, 160 takes you through Historic Bluff, Utah, which also is worth exploring, but we had our sites set on another target. 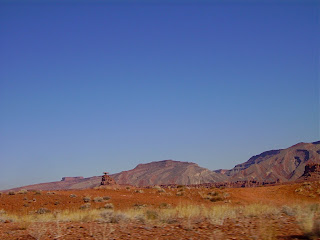 As you approach Cortez, CO (uh, remember the name of this little town!), you wind through some fairly flat land bordered by increasingly massive rock formations. You’ll miss going to Shiprock (a sight we took in on out last trip through here and definately worth seeing) and in particular, one massive monolith begins to dominate the landscape. This isn’t like the puny (by comparison) formations of Monument Valley, no, this sucker is BIG! The base is at some 6900 feet above sea level, but the peak is almost 9000 feet! This is also the site of the Mesa Verde (‘cause it’s a table top mountain and it’s covered with vegetation) Cliff Dwellings. this was were we were headed. One of the things we missed on our last tromp through the area were the various cliff dwellings. There’s four or five in this basic area. All are worth the trip, and Mesa Verde was right on the way, so…
This is another of those “Must See” places. Not that it’s easy. First, you have to get there. The road is good, but it’s inside a national park so the speed limit, the sharp elevation rise (at one over look, it’s like you’re flying in a small plane!) and it’s mostly hair pin turns. Not that we minded, but the rented motor home in front of us was having a hard time of it, sloshing water (hopefully, it wasn’t bright blue) from it’s overflow and wallowing like a whale in heat. It’s some twenty miles to the Visitor Center. There, if you are adventurous, you can get tickets for the ranger guided tours of the most spectacular dwellings. You’d better be in shape. We’re talking climbing 30 foot ladders to get in. We opted for the wimpy one. The park info sheet said it was only a 100 foot walk. What they weren’t clear on was that it’s 100’ STRAIGHT DOWN! The path (which is paved) winds down the canyon wall, making you want to hum “On the Trail” from Ferdy Groffe’s “Grand Canyon Suit,” you know, the bit that sounds like donkeys galumphing along? “Dum-ti-dum-ti dumpity-dum-ti-dum-ti dumpity…” We were “lucky.” We’d got there while the sun hadn’t yet started to shine directly into the canyon. It was “only” in the 80s (at about 10AM!) but the humidity that produced those great clouds earlier that morning was making us pay. Between that and the elevation, we were knackered by the time we got down there. 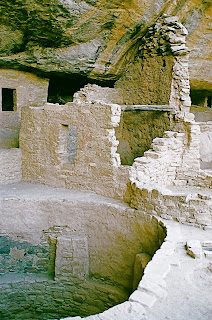 I have to say, it was worth it. This stone age village is set back into a natural declivity in the canyon wall. Over the centuries (around 1200AD) the people who dwelled there filled in the slice out of the canyon wall with walls of their own, creating cubical like structures and digging down into the floor of the cliff to make underground storage and living spaces. It was fascination. The Rangers there were exceptionally knowledgeable and helpful,, not at all stuffy or arrogant or officious. It was crowded (but not really over crowded) with families from all over the US, talking, laughing, and having an awe-inspired good time. What was really neat to me, was that as we climbed back UP that damn cliff face, the sounds of their voices gave the place life. It must have been like that 800 years ago. Families laughing, chatting, getting on with their lives. It was like being able to peek through the dusty mirror of the past, getting an all too brief glimpse of life in an era so totally remote from ours, yet, not so terribly different.
OK, pause to reflect on that nugget of philosophical nattering. 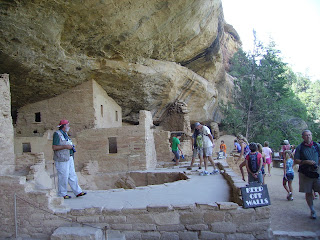 Gasping, puffing and panting, we reached the top and “civilization” and headed for the comfort of the museum. AIr conditioning IS one of the most important benefits of the modern world, and the museum has it in abundance. More importantly it has well thought out exhibits that explain what you’ve seen and the history of the place. I’ll not get into lecture mode, so you can relax. It is a fascinating story, visit (don’t just google it) and see it for yourself.
We had lunch there, then headed back DOWN that mountain and on through the base of the Rockies to Durango. WE got to our motel (the Day’s End Motel, a place that has seen better days and smelled a bit too much of cleaning solvent. Not sure if we really recommend it beyond the fact that it was the cheapest place in town. There are a lot better places in the center of town, they’re pretty pricey, but if you can swing it, do it) and turned on the TV to see what the weather had to offer. “In the top of today’s news, a tornado touched down an hour ago in Cortez…” Wait a second, Cortez, as in the place we went through a few hours before? A tornado? Man, that’s as close to one of those suckers as I EVER want to get! Yes fans, keeping an eye on weather conditions is kinds important.
Having showered (not that it mattered, as soon as we stepped out the we were dripping again) and changed, we headed downtown. Talk about timing! We finally found parking (don’t even THINK of using the Mickey D’s lot!) we wandered into the train station to learn that the train from Silverton was due in in an hour. OK, big deal you say. It IS a big deal! This is a railroad town, and not just any railroad town. This is the terminus of what is now the Durango and Silverton tourist railway. They run narrow gauge STEAM trains here. four or five a day. both ways! This was a major facility on the old Denver and Rio Grande RR. Narrow gauge means the tracks are only three feet apart, making it easier to negotiate the twists and turns on the way into the mining towns that were the raison d’etre for the rail road. The DR&G was also the rail road my great grandfather, Phillip Brian Ready worked for. It was while he was headed down Tennessee Pass that his brakes failed and he was killed. 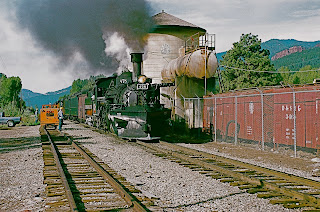 We toured through the museum located in part of the round house, the air filled with coal smoke as a locomotive was being readied for the next day’s run. Again, this was a step back in time. They say that smells are triggers to the memory. They are even more. The smell of the coal smoke, the noises of the crews working one the equipment were the same smells and sounds my great grandfather would have heard. When the train pulled in, announcing it’s approach with tooting whistle and clanging bell, chuffing and panting away, pulling the same passenger cars that were in operation a century ago, time swirled around me, jumping back and forth from present to past tense like a poorly written student composition. Who needs The Doctor to make things all timey-wimey-wiggly-woggly?
Posted by stivmac at 8:25 AM No comments: