Road Trippin’
with Steve McCarthy
I’m not really a morning person. Yeah, these days I seem to get up early, but that’s just a function of age and habit. I’m not what you’d call awake before about 10AM. Thirty years of teaching and needing to be out of the house before 7AM to get ready for the little dears has made it tough to sleep in. This means I’m rarely awake enough to bother with breakfast. A cup of hot chocolate (I really hate coffee- I know, sacrilege in this Starbucks driven world- but then you know me, an iconoclast to the hilt) and a breakfast bar is about it. If Marianne is making bacon, well, naturally I’ll have some of that, but really, I’m just not a breakfast guy. Unless we’re on a Road Trip.
If it’s Road Trip Time, I’m a breakfast-o-holic. Our usual deal is to hit the road at O’Dark-Thirty, and about an hour or so down the road, pull in and get some eats. As a creature of habit, for me it’s always the same thing. Pancakes. Unless there’s Waffles. Then either sausage (only if it’s link sausage in the casing, don’t give me those patties!) or bacon, lots of maple syrup and butter and a cup of hot chocolate. I tell ya, nothing beats good flapjacks in setting up the day for a long drive. Ya got yer protein from the porky goodness, carbs from the pancakes, sugar from the syrup  (hopefully but rarely is it REAL maple syrup) and maybe blueberries for some fruit. What more can you ask for?
Now every one has their own favorites to get the day going and I’m not about to try and break you of your favorite day starter. It is perhaps the most personal food choice you can make.  Some people love eggs. Me, I’m not an egg fan. Put it down to my Mom making Christmas ornaments out of  whole egg shells and me having to eat scrambled eggs every morning for what seemed like months. Still, lots of you love ‘em and your choices are endless. Hell, that greatest of all French cookbooks, Larousse Gastronomique lists some 250 or so different ways to do eggs, and that’s not including omelet variations! Eggs are a very personal choice and people are exceptionally particular about having them perfect and their way. I get that. Then there’s the SoCal invention, the Breakfast Burrito. Again, very personal choice as to what it should contain. A Talmudic Debate can arise just bringing up the topic.
The point of all this is to give you our Top Spots for Breakfast On the Road. These are the non-corporate, locally owned, mom and pop diners that once were the staple of Road Trip Life. These are the places that sustained generations of Fellow Travelers, both professional and recreational. There was an old saw about “Eat Where the Truck Drivers Eat.” Once I think that was true, but usually it meant that the food was cheap and plentiful, not necessarily good. Today, most truckers still prefer that (it’s coming out of their pocket and their profits after all) and the Mega Eateries know this and cater to it. It’s just not that good a guide any more. In unfamiliar territory, it is a good indicator if there are a lot of cars in the parking lot that look local. Locals know and support places that are good. Places that give good value and good food. So, in unfamiliar territory, let that be your guide.
This list is just the tip of the iceberg of course. It’s not definitive and best of all, it’s local. All of them are within an hour’s drive from Monrovia. 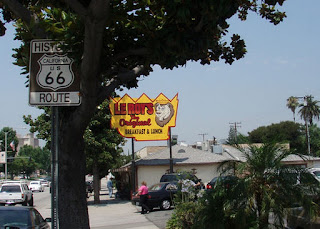 1) LeRoys. 523 W Huntington Dr, Monrovia, California (626) 357-5076  · leroysrestaurant.com. This place is on old Route 66 and is in our backyard. It’s a serious diner that is open only for breakfast and lunch. It’s almost always crowded, and prepare for a long wait on Saturday and Sunday mornings. It’s also terrific!!!! Pancakes that flop over the edge of a dinner plate, good bacon, good sausage and a great staff. It’s been an institution for decades here in town. In fact, as I’m writing this, I’m in a bit of a rush because I’m meeting my sister Sue and her husband Rog there for breakfast this morning! 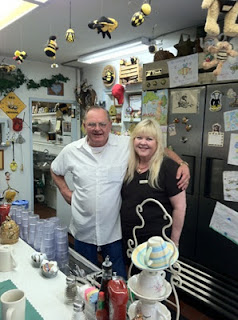 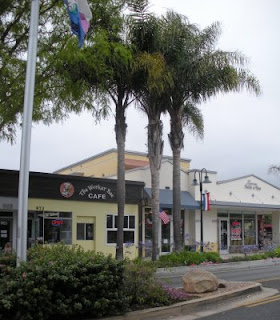 2) Worker Bee Cafe 973 Linden Avenue, Carpinteria, CA. (805) 745-1828 Dear Constant Readers and you who have my book will have heard of this place. It’s one of our favorites and a must stop if we were headed north on 101. The couple who run it are wonderful. He cooks, she wait’s tables. He’ll come out to chat and the locals all give him guff and he gives it back. The waffles are quite good and again the place is crowded. The decor is wonderfully kitschy, filled with Bee Themed Stuff. As it should. Like all good diners, they also cater to families and will bring out a bucket of small toys for kids to fool with while they wait for the food. As with LeRoys, they only do breakfast and lunch.

3)Summit Inn Restaurant, 5970 Mariposa Rd, Hesperia, California, (760) 949-8688. This is another classic Route 66 Diner. One of the originals and one of the few real one’s left. Get there NOW because there are new owners and it seems a bit up in the air if they will keep it open. That would be tragic. This place is right at the top of Cajon Pass and is perfect if you are headed east. The staff are what you’d want. They call you “Hon” and serve up good food with a smile and some conversation. This place is open for dinner and serves exotica like buffalo and ostrich burgers. Seriously, make a stop there and SAVE THE SUMMIT!!!

4)  Bun Boy 1890 West Main Street, Barstow, CA,(760) 256-8082. OK, Barstow is more than an hour away, but this place is another classic Route 66 spot. It’s pretty far off the interstate, but why the heck are you on the interstate in the first place? If you take Route 66 from Victorville, it’s just as you get into Barstow. There’s a huge parking lot from the days when the trucks rolled by and the food is great! Truly homemade everything, and all the funky decor that you’d expect.
So, there’s four places to start with. Please support your local diners so we won’t be reduced to McJackKing slop as our only choice. Try ‘em all, and if you have one to add to the list, let me know at steve@theacemagazine.com. Good Eating, and Good Road Trippin’ to ya!
Posted by stivmac at 9:40 AM No comments:

Road Trippin’
with Steve McCarthy
OK, Ladies, this one’s for you. Your husband buys you a new car! Your dream car! Then he spends the next seven years and something like $75,000 making a few “improvements. Raise your hands if this sounds at all familiar. Wow, there’s a Big Surprise. Look at all those hands in the air! Hmmmm, my wife, Marianne, is leading the charge. Uh, oh.
No, I didn’t spend $75k on the Mustang. (or the Blue Meanie, I think, I don't know, I don't keep track of that stuff, too scary!).  I did add a few touches after the unfortunate Incident with the Camry That Crossed Our Bows Sideways on the I-5 in the OC. No, the King of All Tinkerers with the Wife’s Car, the Champion of Making Just a Few Improvements, the Sultan of Swaps is Louis Mattar. This guy is a Hero for all of us.
Yep, in 1947, he bought his wife a new Caddy. Over the next seven years, he made a few improvements. SEVENTY-FIVE THOUSAND 1950s DOLLARS worth of tweaks and swaps and fiddling. And yes, his wife loved it, shared in it and stayed married to him. Like I said, a Hero!
So what did he do? If you go to Balboa Park in San Diggy, hit the neat little car museum. Mattar lived in DayGo and instead of the Smithsonian, his wife’s Pride and Joy sits there. Ya see, this car is the Ultimate Road Trip Car. Mattar set records that will never be broken. From September 20th to the 27th of 1952, he and two other guys drove non-stop to New York. And Back. 6320 MILES WITHOUT STOPPING!!! Literally. In Kansas City, Camden, NJ, and Omaha, they drove onto small airports where a moving gas truck drove along side to fuel up the 230 gallon gas tank on the trailer they were towing. 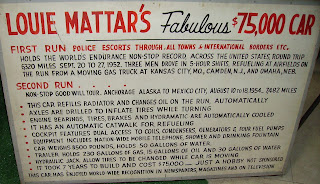 Not satisfied with that, His second run in August of ’54 took him from Anchorage, Alaska to Mexico City, also non-stop, and 7,482 miles. That’s in a world without the Dreaded Interstate. Mostly a world of two lane blacktop, and not a few dirt roads, especially on the AlCan Highway and in Mexico.
No, lest you think that this was just a car towing a huge gas tank trailer, let me enlighten you about the rest of the modifications. The car can automatically change it’s own oil and refill the radiator. The tires can be automatically inflated as the car drives. In fact, using the catwalks added all around, two guys can change a tire while the car is moving at about 25 mph. Behind the rear seats is a vanity mirror. the arm rest folds down to either support an ironing board or a hot dog cooker. Under one rear seat is either a small washing machine, or, remove that and you have a potty. there is fresh water (30 gallons worth in the trailer, and 50 gallons in the trunk!) and a drinking fountain tap under one tail light. The radio antenna is replaced by a shower. The car has two TV’s and an in car telephone-1950’s, remember? This was really far out stuff then! The list goes on. The whole rig weighs in at 8500 pounds or so. And not a computer in sight! 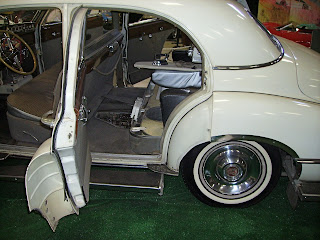 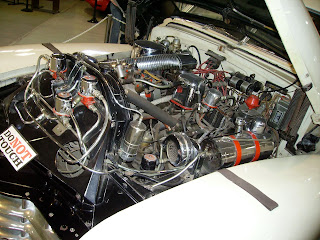 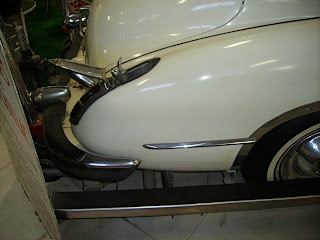 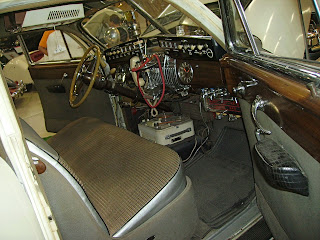 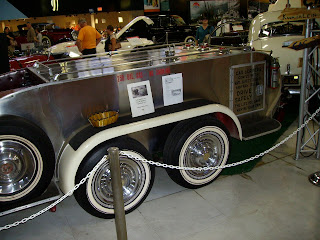 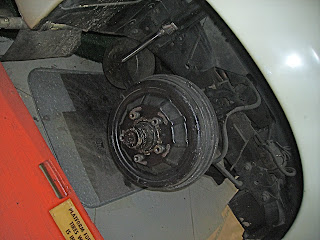 Get yourself down to San Diego and check this thing out. Words and pictures hardly suffice to convey the whole story. Good Ol’ Youtube naturally has footage: http://www.youtube.com/watch?v=yT8azxnVAC4--it’  It’s a bit long, and at times a bit hokey, but still, it’s fascinating! In particular, watch ‘em change a tire on the run with no safety harnesses, no helmets, just doing it! Can you even imagine trying this in today’s world of hyper safety and the nanny state?
So, to usher in this Possibly Apocalyptic Year of 2012, I offer Louis Mattar as the second in our Road Trippin’ Pantheon of Immortals, right up there beside Horatio Nelson Jackson, the first Road Tripper.  Let these two inspire you to Hit the Road! Who knows if you’ll have another chance?
Posted by stivmac at 10:15 AM No comments: