Going SLO for the New Year 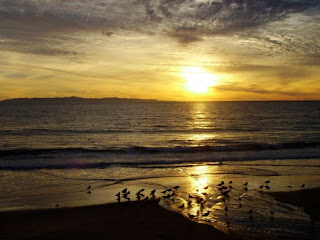 We stopped just shy of the entrance to Emma Wood State Beach and OH MY GOD!  We spent at least an hour staring and taking 114 pictures with the little digital camera and staring and staring. There was a smattering of cars parked with us, the occupants doing the same as the poor lost dead souls up on the highway sped by, seemingly oblivious, too pre-occupied with Getting Somewhere to stop and marvel. The surf beat it’s steady beat, shore birds played tag with the waves, and one of Nature’s Daily Miracles played out a perfect coda for a perfect day.
Posted by stivmac at 10:12 AM No comments:

Dunsmuir to Eureka to St. Helena

OK, so we got to Dunsmuir and poked around at some great sights along the way. Now we need to get on with the next two days of our NoCal backroads trek. From dunsmuir, we’ll be trotting across more pine covered forests towards the coast. For us SoCal folks, all those pine trees give us a whole new perspective on the Golden State. I mean yeah, we have trees here. At least a few are left from the various rounds of fires, but up there, they have TREES! this section of the lower Cascades is actually a rain forest. What’s that you say? “Rain Forest? Isn’t that like jungle? In, like, BRAZIL?” Well, yes and no. Yasee, not all rain forests are equatorial jungles.
This is a Forest, and yes indeedy do, it rains here. A LOT! That’s a hint to be prepared. Especially if you drive an open car. Expect rain even in the summer. In the winter, it snows. And since we’re talking some really minor backroads, you can’t drive them in the winter. They just flat close the roads down, rather than spend the bucks to keep them open. there’s no one up there to keep them open for!
That should give you pause. If not enough people use these roads to bother to plow them in the winter, do many people use those roads the rest of the year? That would be NO! So, a bit of extra care in your driving and extra care in your preparing the Auld Crate are in order. And cell phone service? What’s that? I also hope you packed a picnic lunch because there may not be many places that actually sell food here. Unless you brought your fishing pole.
So, after wandering around such great places as Big Bar and burnt Ranch, you will reach the next night’s lodgings in Eureka. This is a neat town. It started life as a seaport for the logging industry and still performs that function today. Check out the Fort Humboldt State Historic Park & Logging Museum 3431 Fort Avenue Eureka, CA 95503-3828 (707) 445-6567. It’s got great exhibits and plenty of old equipment. It’s amazing to think of guys cutting down redwood trees as big around as your house with giant handsaws and axes! Again, I put this drive together in shorter legs so you could have time to poke around a bit.
The next treat is dinner! Actually, what I said about lunch? forget it. Don’t eat all day. You’ll need the appetite. The Samoa Cook House,  is across the bridge (head north on 101 from the motel and look for Hwy 225 to Samoa--Ya can’t miss it! I’m sure the people at the motel can tell you haw to get there as well.) in the tiny town of Samoa. this place is Legendary! In fact, constant readers will remember a while back when I held a poll on best roads, on of the questions was about favorite places to eat. This was on several lists. From their website (samoacookhouse.net): “Breakfast, served family style, can include eggs, french toast, pancakes, sausages, biscuits & gravy, hash browns, coffee and orange juice. Lunch and Dinner, served family style, include entrée, soup, salad, bread, vegetable, potato, coffee, tea and dessert.” And LOTS of it! This was an actual cook house for miners up until the 1970’s and has stuck to it’s basic format of Fill the Hungry Bellies of Hard Working People. It is also worth looking at the museum on the premises. Eureka is also a neat town to explore, so walk off dinner by strolling the streets. Find the Carson Mansion at 143 M St. this place is spectacular!
So, still sated from dinner, it’s time to head back to St. Helena, or indeed home to SoCal. The rest of the trip should be familiar. It parallels Hwy 101 and takes you through the Avenue of the Giants. This side trip is not to be missed. neither are the funky tourist places along the way. Trees of Mystery, Confusion Hill, the Drive Through Tree, all of it is worth the stop. Experience how simple being a tourist used to be. Set aside your jaded 21st Century outlook, suspend disbelief and just enjoy. I recommend going back to St. Helena for the night. It will allow you time to poke around more, as well as hit some of the great wineries in the area. So, enjoy October! In November, I plan to suggest some reading material to put on your Christmas Wish List. Books that I THINK we can find at a particular store in Burbank!

The exact directions can be had by buying a copy of the October issue of ACE from autobooks-aerobooks.com. There is a link at the top of this page!

Nowhere-A rough draft of a story I wrote a long time ago.

Excuse the typos. I just redid this story after lying dormant for decades. 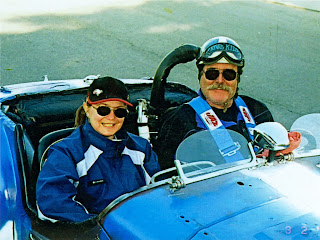 Dedication
All of this would never have been as much fun without my co-driver-for-life, Marianne. She is the best of sports. Freezing, broiling, soaking, and holding it in when there just isn’t a place to stop. Not many women would put up with this with her enthusiasm and good humor for these thirty years plus. Gra mo chroi mo Mari!
Road Trippin' an Introduction
Hi, I'm Steve and I'm a Road Tripper. I've even written a book, called curiously enough, Road Trippin'. So, what is a Road Trip, anyway? A question of almost Talmudic proportions. Well then, let's talk Road Trips. Not the "Load-the-Kids-in-the-Mini-Van-Turn-on-the-DVD-and-Rush-to-Some-Far-Off-Theme-Park-Eating-Fast-Food-All-the-Way-on-the-Interstate-with-the-Cruise-Control-On-and-Yakking-on-Cell-Phone-Road-Trips;” trips that sadly confirm John Steinbeck's prediction: "soon, we will be able to drive coast to coast and never see anything." No, real Road Trips. Road Trips on back roads. Road Trips eating at Mom and Pop diners. Road Trips of odd souvenir stands and picnic lunches. Road Trips of spectacular scenery where the journey itself is the reward, and to top it off, you have to do it in a Real Car.  In my case, its a 1960 Triumph TR3 with racing windscreens, no top, loud exhaust, stiff suspension, and at times in the past, questionable reliability. Your vehicle may differ. Oh Yeah, let's make the Road Trip a LONG one. At least a couple of hundred miles in a day. Now that’s what Road Trips are about!
And, that's what this blog is about. I'm a bit new to the whole blogging thing, I'm more than a bit of a neo-luddite so if I violate any blog etiquette, or step on any toes, I'm sorry. Mostly. If you have an interest in Road Trips, and especially in my book, please feel free to visit our website for more information on the book, our fine art photography, and a listing of stores carrying Road Trippin' as well as Art Fairs and events were we will be appearing.
http://www.mccarthypix.com
Thanks for stopping by, Have Fun and Be Safe!
Posted by stivmac at 11:55 AM No comments: