OK, I admit it. I’ve caved. Seems every paper, blog, magazine, and media outlet did a “Scary Whatever” for October. So did I. Heck, I may as well cave all the way, so, it’s November, so why not say Thanks for all the Car Related Stuff that have made our lives better.  Here goes, in no particular order:
Back Roads: These do have to be on the top of the list. I’m thankful that all the great driving roads haven’t been widened into Super Highways. I’m glad there’s still roads that they don’t bother to paint a center line on, and only occasionally pave. These are the roads we thrive on. These are the roads that our cars were made for. These are the roads that take us to something other than another Big Box Corporate Emporium that sells the same crap as all the others do. These are the roads where the wild flowers bloom in the spring and you can smell them in an open car. These are the roads that Camry, and Pious, and Motorhome divers stay away from. These roads give us Joy and Soul Sustenance. 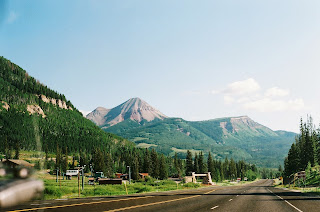 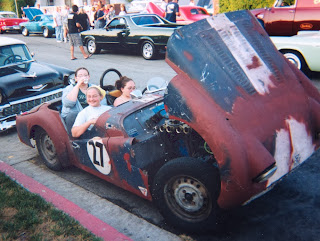 People Who Actually DRIVE the Above: And more than a quick jaunt to a local car show. Trailer Queen’s Get Thee Behind Me! Cars are first and foremost, a mode of transportation. Their very existence is for the purpose of being driven. To let a car sit in a garage, to be only pampered and polished, for the owner to be in too much fear that the paint will get chipped is a Mortal Sin. The Blue Meanie will never win awards at car shows. The Auld Crate actually gets sneered at by Purists. That make us both happy. I guarantee we’ve had more pure FUN than 90% of the worriers. I’m always bemused when I tell people that we drove to, say, Olympia and back. “All that way? It made it? I don’t know if I could do that with mine.” Why the heck not? Didn’t you build it right? These things are not as fragile as popular mythology would let you believe. Built right and maintained (aye, there’s the rub), they will give you the ride of your life for thousands of miles. OK, they get Dirty. They Leak. They aren’t a living room on wheels. So what? If you own it, drive it! Thanks to those that do! Fun, isn’t it? 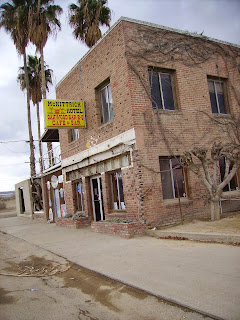 Mom and Pop Diners: This applies to any eatery that is owned by a sole proprietor or limited partnership. They are run with care and good humor. They are friendly because they’d like you back because this is how they make their living. This is how they’ve risked their future. Most fail and fail miserably. As my mom once said, “Owning a restaurant is a license to work.” Amen to that, and a HUGE THANK YOU to the folks who have had such a calling. The food is mostly good and always has character and is always different from the last place you stopped. They don’t have to add “Flavor Enhancers” because the bean counters at corporate haven’t dictated that food be so over processed that the taste is gone. Somewhere, in a secret mahogany paneled conference room at McBrugerJack HQ there must hang a picture of Dr. Goebbels. Beneath it his dictum: “If you tell a lie often enough, people will believe it.” For decades, these clowns have told us that we should be “Lovin’ It” and we’ve all heard it often enough that in general, we do. I’ve talked to kids who don’t like In ‘n’ Out Fries! “They taste funny, not like Mickey D”. Honey, that’s because they actually make them out of REAL POTATOES! What a novel concept. So, Eat at Joe’s (or Jane’s, or Ducky’s or Leroy’s), support your fellow citizens!
Mom and Pop Motels: Ditto. 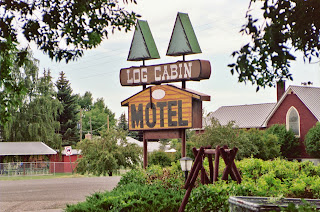 A Good Honest Mechanic: OK, almost an oxymoron these days. But they are there. They don’t usually work at Double A BLEEP BLEEP (one guess what the bleeps REALLY mean), or the guys who put the Midas Touch on your wallet. They sure don’t work at the local gas station (they certainly aren’t service stations) anymore, but they are out there. Last week I heard tell of a guy in Riverside who usually works on all the mundane stuff, but LOVES it when you bring him a Citroen! Or Carburetor Carl who just retired. Man is a GENIUS with weird cards. Got a Simplex with an updraft Rochester? Just his meat! Or the shop here in Monrovia, Ward’s Service, that just celebrated 90 (NINETY) years in business. They can actually replace points and condensers and do a tune up! Or Star Auto Electric who has for some 40 years built essentially brand new Lucas generators. I’ve even found a tire guy, Rudy’s LLantas Usadas y Nuevas who can still put tubes in tires! So will Nate Jones in Signal Hill. Hell, he’ll even restring and true the wire wheels on an Austin 7 that’s just passing through town on the way to the end of the world! Or Frank Monise. That’s now Junior. He’s probably tired of the Junior, but I used to deal with the Old Man, so, Frankie, you’ll always be “Junior” to me, but out of respect. Great Respect. He literally grew up in his dad’s greasy shop in Pasadena. There isn’t much he doesn’t know about Auld English Crates. So, we all have these gems, be thankful for them and throw business their way.
Moss Motors, the Roadster Factory, XK’s Unlimited, Western Hemispheres, British Wiring, Ol Phartz Partz, and all the others who keep making stuff for our Auld Crates. With out them, we’d be is REALLY DEEP KIMCHI! Yeah, we scream about prices but really, where would we be without them? Ever try and get ANYTHING from Poop Boys? “What kind of car is it?” They can’t help you with out that. No, you can’t just ask for a valve cover gasket for a small block Chevy. Even when they are ALL THE SAME. Doesn’t matter. I tried to get tires for the TR at one. “I need four 186/60x15 tires.” “What kind of car is it?” “Who cares, that’s the size I need.”  “I can’t look it up with out the kind of car.” “Ok, 1960, Triumph TR3.” “Uh, we have a 1965 VW…” “Well, that’s not quite it, is it?” They wound up not being able to sell me tires because the computer wouldn’t let them. So, be thankful for the suppliers who keep us on the road. Without them, we’d have really expensive planters.
Technology: Yeah, that’s me, the reigning Neo-Luddite extolling things like GPS, Google Maps, and Radar Detectors. All for obvious reasons. High Tech has made our liver easier and more interesting, as long as we use it as a tool and not an end all, be all. Like those couples who sit in a restaurant on a date, texting other people. Sad. Or the truck driver who takes his rig over Angeles Crest and kills people. Tragic. Don’t be that guy! Smart usage helps find the neat roads. It can also find you the way home AND you don’t have to stop and ask directions.
All My Readers. Both of You: Without someone to read my meanderings, I’d be the falling tree in the forest that makes no sound. Or does it? This also includes my family who put up with and have grown up to enjoy Road Trips. Especially my wife Marianne. She is a Goddess to all. Women shake their heads with wonder and awe over the idea of her SHARING a small suitcase for a three day drive and only bringing one other pair of shoes! She gets her hair mussed and hands greasy, doesn’t complain too much, and actually enjoys our jaunts together.
Lastly, Chuck and Tina, Owners of Autobooks: They got me my start in writing for real with this column. From there, I’ve managed three books and have another on the way. I appreciate their support more than I can say.
So, Have a Great Day, Turkies, and maybe, we’ll do a Christmas Wish List Next Month!