A Christmas Wish List. In keeping with the past couple of columns, I’m sticking with the holiday theme. This isn’t just a personal wish list (if you really want to thank your faithful scribe, get him a gift card from Moss Motors!, just send it to Autobooks and I’m sure Tina will forward it along. After all, Moss doesn’t carry Alfa parts, so it won’t get diverted!) but more of a selection of wishes and dreams that I’m sure all of us Road Trippers share. 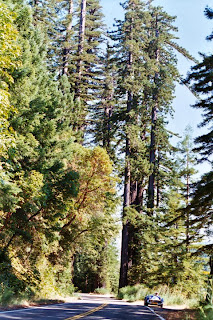 1) Reasonably Stable Gas Prices! It’s gotta be at the top of the list. This routine gouging of drivers has got to stop. Clearly, market forces are not at work here, especially in California. OK, we expect a bump in prices in the spring, as we switch to Summer Grade Gas. Refineries have to shut down to change over and for maintenance. That lowers the stock on hand and prices spike up. It’s also more expensive to make. Those are legitimate reasons for a price increase. But this spiking up over a dollar or more a gallon is not the alleged free market at work. Oil producers need to be wary of this, we’re on to you and we’ll get the government involved and we’ll all wind up being sorry.

2) Fix the Damn Roads!The state of roads nationwide has become appalling. The City of Los Angeles is particularly culpable. Politicians are now whining that because cars are more fuel efficient, and more people are driving smarter, that road tax revenues are dropping, so there’s no money to fix the streets and bridges. Bull Puckey! One of the REALLY horrid ideas is a little black box that will tell the gummint how many miles you’ve driven and each year, you get a bill. This kind of Big Brotherism is appalling! There’s also a move afoot to double registration fees in California. Uh, no. How about CalTrans and various cities actually use the money they get more efficiently. Do we really need wonderfully landscaped highways when the pavement is cracking and full of holes? Seriously, set some priorities!

3) Better Driver Training! This has been a pet peeve of mine for a long time. Driver training in this country has always been poor. No one is taught IN A CAR how to properly do a “panic stop” or what it feels like to spin a car. No one is taught the ability to make an avoidance swerve in the rain and not spin the car. All that is taught and tested is how to cruise the surface streets with a low level of competency. Today’s cars are capable of far faster cruising speeds than those of just a few decades ago. Driver Training has been stuck in the 50s, and in fact, been watered down from there. What ever happened to the requirement that one should be able to parallel park a car? If I could pass the test parallel parking a ’59 Pontiac Wagon, why shouldn’t the kid in mommy’s Civic have to do the same? Now, the government is moving to more crash avoidance systems, making cars both more expensive AND less likely to be fixable down the road.

4) Better Enforcement of the Laws that Matter! Have you noticed that ever since the CHP got permission to use radar, that speeding tickets is almost all they care about? It stands to reason. They do less work, sit or cruise with the radar on, and crank out revenue generating speeding tickets, all the while lamenting that it’s Drunk Drivers who kill people. In almost all the articles on top crash causes, Tailgating is cited as a top contender. It’s lumped under the umbrella of “Aggressive Driving” but ⅓ of all fatalities involve a rear end crash. There is really only one reason for this, Tailgating. Add to this the other overly aggressive maneuvers of excessive lane changes, passing on the right (what ever happened to “

5) More Driver Courtesy! OK, most of you who read this drive more briskly on the back roads. To most people, these roads are difficult to manage. They don’t have the skills or the confidence to maintain a higher average speed. So, use the turnouts. PLEASE? When I drove buses, we drove children’s groups to camps in the local mountains, usually every week. A loaded bus gets up a hill at 25-30 mph. It’s the best it can do. We were taught that more than five cars behind you is a ticket. We were taught to use every available turnout sos to not impeded others. We also got paid by the hour, not the mile, so if it took longer to get up the hill… So, why is it so rare a thing these days? I followed some bonehead in a Prius (of course) for some 20 miles at 25mph because HE was incompetent. We must have passed some 10 turnouts he could have used. There were 10 cars behind him, but HE was Saving the Planet in an Ugly Car, so it was ok. While we’re on the topic, what about your OWN road courtesy? When someone pulls over for you, or lets you into traffic, do you give them a friendly wave of thanks? When you come across a cyclist working like hell up a steep grade, do you back off until you have enough room to make a safe pass? Do you let people zipper in in heavy traffic? Do you pull over for a faster car? Do the right thing and people will respond, and maybe, they’ll do the right thing down the road.

6) A Safe Trip for all of you! As we were told by our dispatcher, keep the shiny side up and the greasy side down. Check your fluids. Pee whenever you get the chance. Above all HAVE FUN OUT THERE AND HIT THE ROAD!


So, that’s my wish list. I’ve been reasonably good Santa. How about granting me and my Road Trippin’ friends at least a few of these. It’s not too much to ask, is it?
Posted by stivmac at 12:47 PM No comments: