What to Pack for an Epic Trek?

This is the big question for any Road Trip. Especially a really long one. We are not planning a really long one. We are planning an Epic Trek. Not so much in miles, heck, we’ve done the 2500 mile to Olympia and back. Twice. In the TR. So, the 2800 miles or so around The Isles shouldn’t be an issue. And since we usually do the Oly Trip in three days, up, three days back and say, a week with the family (and their laundry facilities), that’s just a week’s worth of clothes, or so. The Grand Tour will be a bit more extensive. More than a month on the road. That will require more thought.

One of the things we learned from our friends, Guy and Eunice and their 18,000 jaunt in an Austin 7 (constant reader will remember that column) was that constantly worn clothes wear out. Marianne had to take Eunice shopping to replace a good part of their wardrobe while they were here. Now, we aren’t in their league, but still, it’s a consideration. We’ll need more than a backpack between us (the usual for a three day tour). We’ll need more than the two small suitcases we used for the last trip to Oly. But then, the TR will only hold just so much stuff. There’s the rub. In a normal car, you can pack most of your closet, the requisite 12 pairs of shoes, tuxedo, formal dress, hats, the whole magilla. Not happening.

We settled on five full changes of clothes (all long pants and long sleeve shirts), some extra underwear and socks, two pair of shoes, a light jacket, our heavy jackets, and a sweater. Each. That’s it. Since I’ve built in rest days every three or four days on the road, we should be able to do laundry as we go along. Bigger hotels and many B&Bs offer laundry services, we’ll just have to choose carefully and keep ahead of the game.
Since we also know that Erin’s Green Isle is green because it rains, A LOT, and because over there, weather in the 70s sends people looking for cooling shelters, we’re planning on clothes that will keep us comfortable and (hopefully) dry. To that end (and I can’t think why we never thought of it before) we sprung for some motorcycle touring jackets. Over the years, we’ve tried all manner of parkas and heavy jackets, all to varying degrees of disappointment. Usually, they just aren’t made with driving in mind. The motorcycle crowd have managed to perfect touring clothes. No surprise there if you think about it! I just wish sports car and motorcycle people talked more. We could learn a lot from each other!

We went to Burt’s Mega Mall in Covina to look around. The other possibility was Laidlaw’s Harley-Davidson, but everything there is emblazoned with H-D logos and as a result, costs 50% more. The people at Burts were great. Took the time to talk to us and understand what we wanted. We picked Joe Rocket jackets for a couple of reasons. First, they fit just right. Especially for Marianne. You see, they make WOMEN’S TAILORED JACKETS! Up until now, Marianne has had to put up with heavy snow jackets made more for men. Face it, her figure is a whole lot different (and better looking) than mine. The distribution of bulges on the female anatomy just doesn’t fit into a man’s jacket, if you know what I mean! 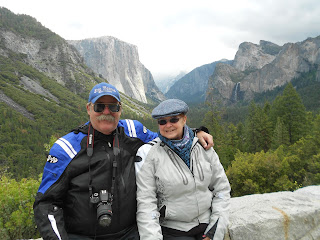 These jackets are also water PROOF, not resistant, have a zip-out liner, and zippered vents if it gets warm. They are also cut in the shoulders and sleeves for a riding/driving position, so you don’t get the binding you do in a normal parka. Hell, they not only have an extended back and shortened front, but you can tie down the back to your belt so it doesn’t ride up on you! One oddity is the extra pads in the shoulders, elbows, and back. We took out the back pad, you can’t sit in a car seat comfortably at all, but the shoulder and elbow guards will add extra wind protection at the joints. We tested them last spring on our tour to Yosemite and they work perfectly. If you do a lot of touring in an open car, you MUST get one of these jackets. Try on several brands and see what fits you the best. The other nice thing about the Joe Rocket jackets, the women’s styles come in more feminine colors, not just black. Made Marianne happy! They aren’t cheap, figure a good $200+ each, but SO worth it!

The other worry was also weather related. The last time we went to Oly, I added a trunk rack for the extra bag. Now, that outside bag would, I knew, be exposed to the weather. Oregon and Washington are comparable to Ireland when it comes to rain. For that trip, I found (of all things) a rain cover for a BBQ grill to wrap the suitcase in. It worked well enough, but by the end of the trip, the wind had torn it. I knew something better would be needed. Something completely water PROOF, not just water RESISTANT. There is a huge difference. Water resistant will get you from the house to the car and stuff won’t get wet inside. Riding on the back of a sports car in any kind of a real rain? FUGGETABOUTIT!

So, where to look? Again, time to look outside the normal box. I got to thinking about what kind of travel involved a lot of water. Of course, travel ON the water! Kayaking, sailing! Naturally, Sport Chalet and REI were the first places I checked. The best I could find were duffle bags that were too small for the amount of clothes we’d need. At REI, I found someone who set me on the right course. What we wanted were called “Dry Pack” bags, and yachting equipment places were what we wanted.

Now, I asked me self, “Self, where would we find that kind of store?” Well, where else, but near local marinas. DUH! We poked around a few and finally, in San Pedro, found someone who knew what we’d need. Sadly, they didn’t carry them. He did search his catalog and found what we needed. They are Kwik-Tek Dry Pak Duffle Bags 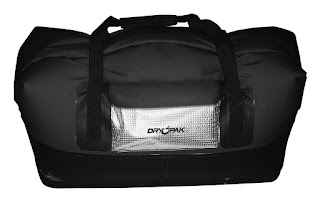 (http://www.amazon.com/gp/product/B003818CJO/ref=s9_hps_bw_g200_i2) and are perfect. First, unlike most duffle bags, these open more like a sports bag. This means you have a nice large opening to pack and unpack through, as well as handles to make carrying easier. Second, they are made of water PROOF vinyl/polyester. Third, and maybe most importantly, they don’t have zippers. Zippers cannot, repeat, CANNOT be made water proof. Period. The way the closure works is the edge is velcroed together, then you roll the seam over several times, finally locking the ends down to the base and then doing up a cross strap. Anything short of full immersion for hours will be no problem. What sealed the deal were reviews by several motorcycle riders (them again!) who reported riding through heavy down pours for hours and arriving with dry clothes. SOLD! Again, they ain’t cheap! $150 for the extra large. We got that and the medium (after checking measurements on the TR. The large will fit in the trunk, the extra large on the rack! Add on a heavy duty bicycle locking cable for theft protection and some heavy ratcheting tie down straps and we will be set to go, come hell or high water!

Next month, we’ll talk about the necessary ancillaries.
Posted by stivmac at 1:03 PM No comments: