OK, I know, we usually tout cheapo motels. I mean, if the best thing about your trip is the hotel room, maybe your trip wasn’t all that great. How much time do you spend in it with your eyes open? HOWEVER, there are times when you have to treat yourself. Times when you really should blow the budget and eat mac and cheese for the next month. There are a few places right here in California (well, OK, I cheated and included one in Arizona, but you’ll see why) that are the Grandest of the Grand Resort Hotels.
These are the places that have been around forever. These are the places that catered to the well heeled traveler, back when all motoring was an adventure. These are the places where you wish you had a Packard, a Dueseneberg, or something of that ilk to roll up in, rather than the family Camry. These are places that you should at least Dress For Dinner. Seriously, you should treat yourself (and a special friend) to at least a couple of these.
Now, we’ve hit most on this list, at least for food or a drink. Three we’ve stayed in. Each time, it was a glorious adventure that made us feel as if we reeked of class and cash. In each case, there is an attitude that you have to take with you.
First, none of these is a Holiday Inn. Do not expect the same kind of corporate amenities. Do not expect the kind of forced sparkly sterility that passes for “elegance” in today’s world. These are what is referred to today as Old School. Many have been “uprated for the modern traveler” but most have not. Thank God for that. One (at least) has no TVs in the rooms!
And second, SLOW THE HECK DOWN! Take each at the leisurely pace of a bygone era. Stroll, linger, wait, relax. Soak it all in. There’s plenty of time to rush back to the Rat Race. These are places to escape that. Nothing irritates me more than some pushy yuppie who writes bad reviews because the wifi wasn’t fast enough, or the staff didn’t snap to attention the minute they graced the place with their holy presence.
So, what are these places? I’ll go through them in alphabetical order, so’s to not show any favoritism. There are others, but these are the cream of the crop. I’m including links to wikipedia so you can learn more. Prices are in parentheses, and may of course change. 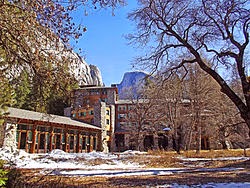 Built in 1927, it’s one of the finest resorts in the world. Heck it’s in Yosemite, for crying out loud! For setting, it rates an A+ only because the scale doesn’t go any higher. It’s the height of elegant tourism. I’ve only managed to see the lobby, more’s the pity, but even that peek into the past was amazing. Interestingly, it and the El Tovar are also the only ones on my list that isn’t on or near Highway 101, showing that California travelers flocked to the Coast Route as THE place to travel. 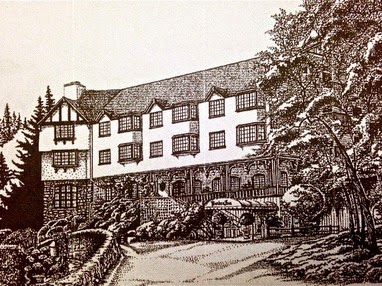 This wonderful place dates from 1926, and yes, we’ve stayed and eaten here. It is amazing! There are NO televisions in the rooms, there IS however a pair of wine glasses and a carafe of sherry in each room. The lobby has tables with games and puzzles set out and the restaurant and bar are terrific! The Redwoods are only a shade less spectacular than Yosemite, so, the views are worth it all. 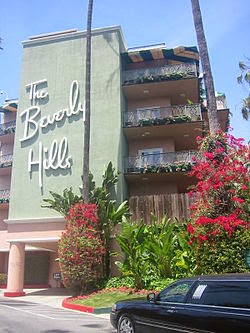 OK, I know. But still, you at least have to have a drink in the bar. Dating from 1912, it reeks of Hollywood History. Marianne and I had drinks there one evening. It was pretty cool. Even if we rolled up in her ’66 Mustang. We were at least dressed for it, if the car was not. 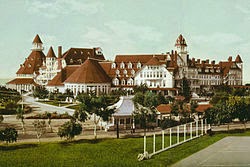 This is the oldest on the list, built in 1888. It’s one of the few wooden Victorian hotels left. At the time, it was the largest resort hotel in the world! It’s also the second largest wooden structure in the US! The largest is the blimp barn that makes up what is now the Tillamook Air Museum, and yes, we’ve been there too! I got to stay there once way back when I was a bus driver. Had a Little Old Lady group, got a free room, free dinner, AND got paid for the privilege. Make sure you stay in the REAL hotel, not the new annex. 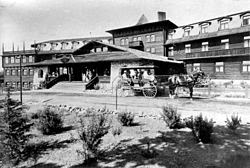 This is some twenty-five years newer than the Coronado, built in 1905 as part of the Santa Fe Railroad’s push to show American’s the Wild West. It was originally run by Fred Harvey and is clearly tied with the Ahwahnee for most spectacular scenery. It’s almost on the rim of the Grand Canyon. Can’t get much cooler than that! Take the Grand Canyon RR there for the full experience! The food is wonderful, especially in the winter. Warming onion soup and soft bread that warms you down to the toes. 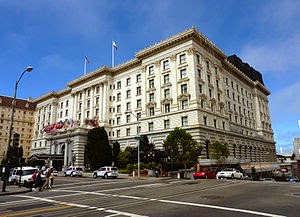 THE GRAND DAME of California hotels. It survived the 1906 earthquake! The United Nations was created there, and Tony Bennet first sang “I Left My Heart in San Francisco” there. Need I say more? One has drinks at the Top of the Mark, and STAYS at the Fairmont. 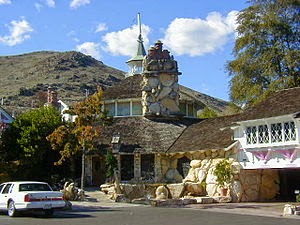 We just stayed here. It was great. It’s also the New Kid on the Block, opened in 1958. That means Marianne and I are older than it is. It’s a tribute to 50s kitschy. It’s tacky. It’s over the top. The urinal in the men’s room is a rocky water fall. The dining room is decked out in red flocked wall paper and gilt cherubim and seraphim and gold and crystal chandeliers. Instead of an elegant Packard, you need a Caddy convertible, wear plaid Bermuda shorts and a straw hat. It’s beyond everything a California Beach Resort should be.

OK, I know there are probably a few more, but these are The Essentials. At least visit them and have a drink in the bar or a dish of soup in the restaurant, and imagine an era when hotels purposely tried to look and feel different. A time when we weren’t cookie cuttered into bland imitations of what was truly spectacular and Grand.

THE GREATEST NATURAL WONDER IN THE WORLD. Or one of them anyway. There are some caveats to a trip to Yosemite. First, ALWAYS check to see if the roads into the park are open. ALWAYS. Fires, landslides, and snow can always impact this trip. Expect the unexpected. Now, I’ve TRIED to make sure the directions work, but remember, from past trips to the area, GPS,Maps, Reality don’t always dovetail together. Have a good map with you and look sharp for road signs, and be careful, locals seem to think it’s a fun game to rotate signs!
The next bit of advice is to pack a lunch, but DO NOT LEAVE FOOD IN THE CAR THE BEARS WILL RIP YOUR CAR APART TO FIND IT!!!!! The Ahwahnee is one of The Great Resort Hotels, but the food there is EXPENSIVE. There are other places to get food in the park, but it’s only not as expensive as the hotel. It’s up to you.
Third-BRING A CAMERA! Stop at Inspiration Point, just out of the tunnel leading into the park. It is guaranteed to bring tears to your eyes. If it doesn’t, there is something seriously wrong with you! Handel should be ringing in your ears when you pop out of that tunnel!
As usual, enjoy the roads, understand that this is one of THE most popular places to visit, so be patient with the traffic. Have Fun and watch out for Crazy Rabbits!

29. Turn left onto E Manning Ave
Destination will be on the right 3.4 mi