Join us now for an episode of the new hit reality series, “Franco-American Pickers!” The camera pans back to show four guys in a crew cab pickup, towing a trailer through the darkening high desert as they pass the long defunct Road Runner’s Retreat Restaurant. Off in the distance looms one of the quintessential landmarks of Olde Route 66, Roy’s Diner in Amboy. Actually, Roy’s Diner IS Amboy. 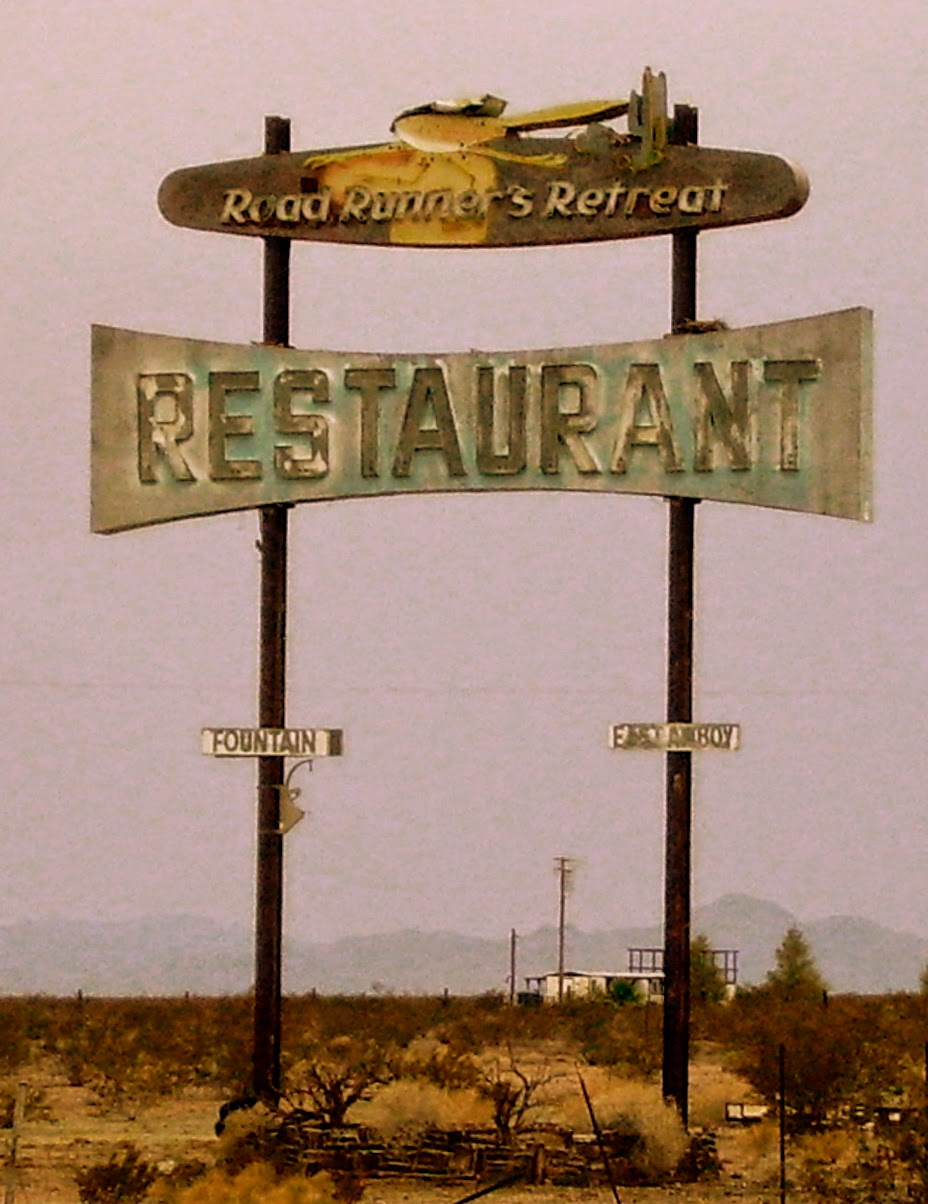 It’s been a long ass day for our four intrepid pickers, but a mostly successful one. Wally didn’t really pick anything, he was mostly along because he was our Guide. Chuck found tires, a custom roof rack for a DS, some hubcaps, and assorted nards and skizzies. John, although he found some key Stuff, was a bit skunked. He had brought the trailer in hopes of bringing back a Major Prize. Either a 2CV or a Traction-Avant! Meself? I scored a rear passenger door for a Citroen Wagon, a trailer hitch for same, a gallon can of honest to God Castor Oil (makes ALL cars smell like Race Cars), and some highly useful front end alignment pads. There was also some Citroen “smalls” as we call it in The Trade.
Now, about now you’re saying to yourself, “Self, Steve has a TR3. What does he want with Froggy Car Parts?” Well, constant followers will recall that I succumbed to the allure of the ever so sexy French. I got a Citroen Wagon. The idea is that, fixed up, it will be a great car to haul our art fair impedimenta about, be kinda funky on trips, and generally, just be Cool. It needs some help. A lot of help. But hey, I can ALWAYS do with another Car Project, can’t I? 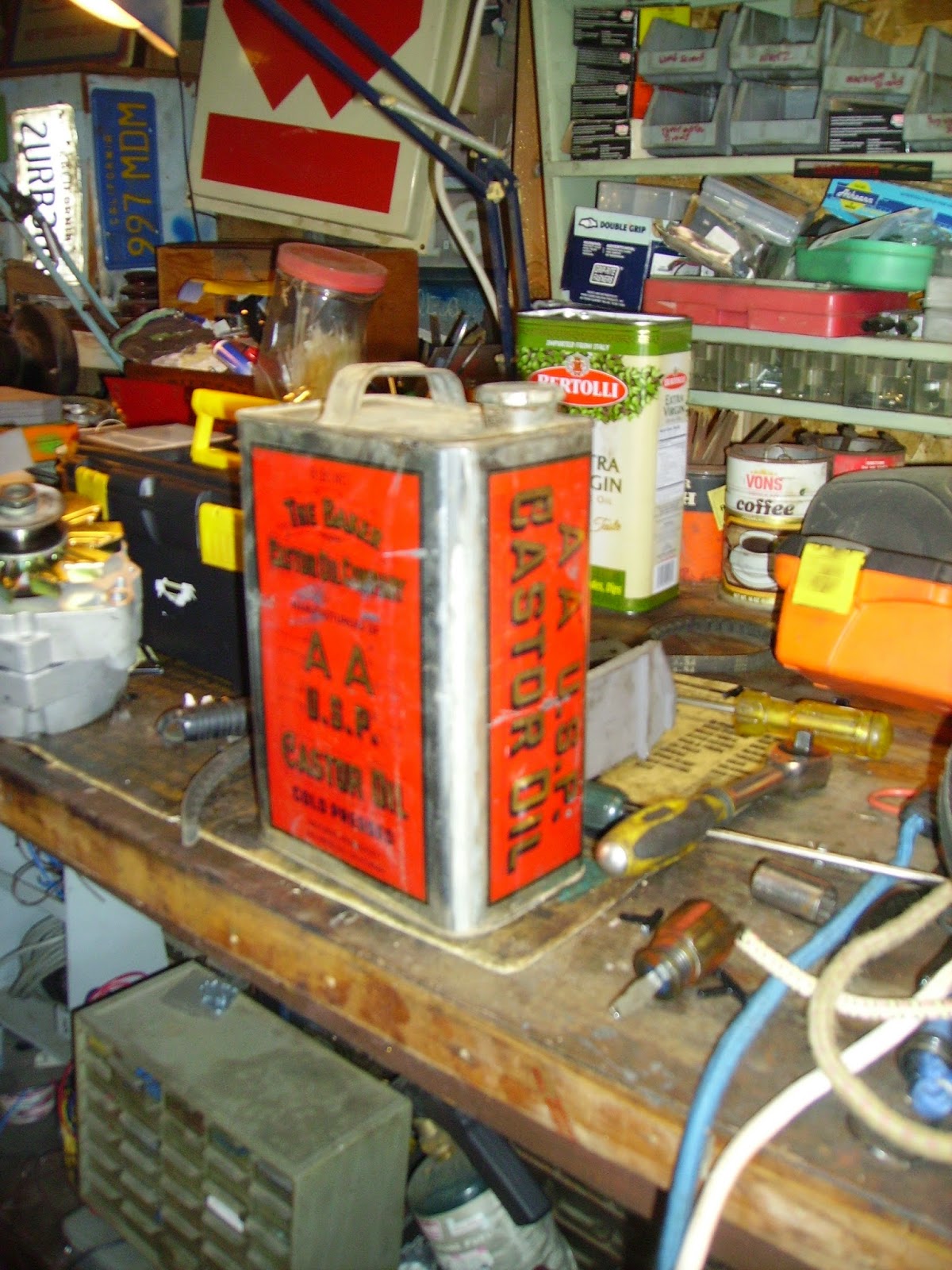 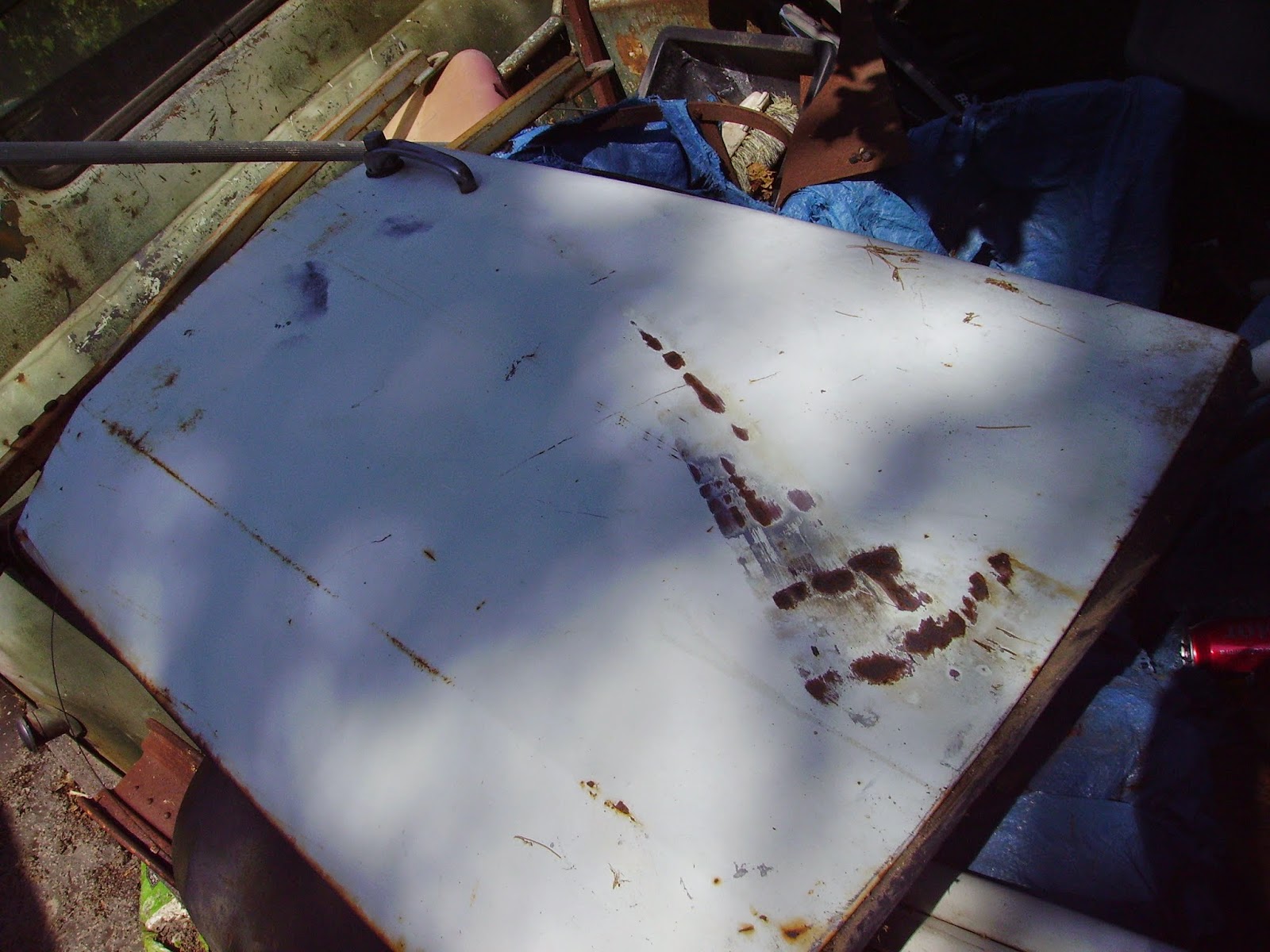 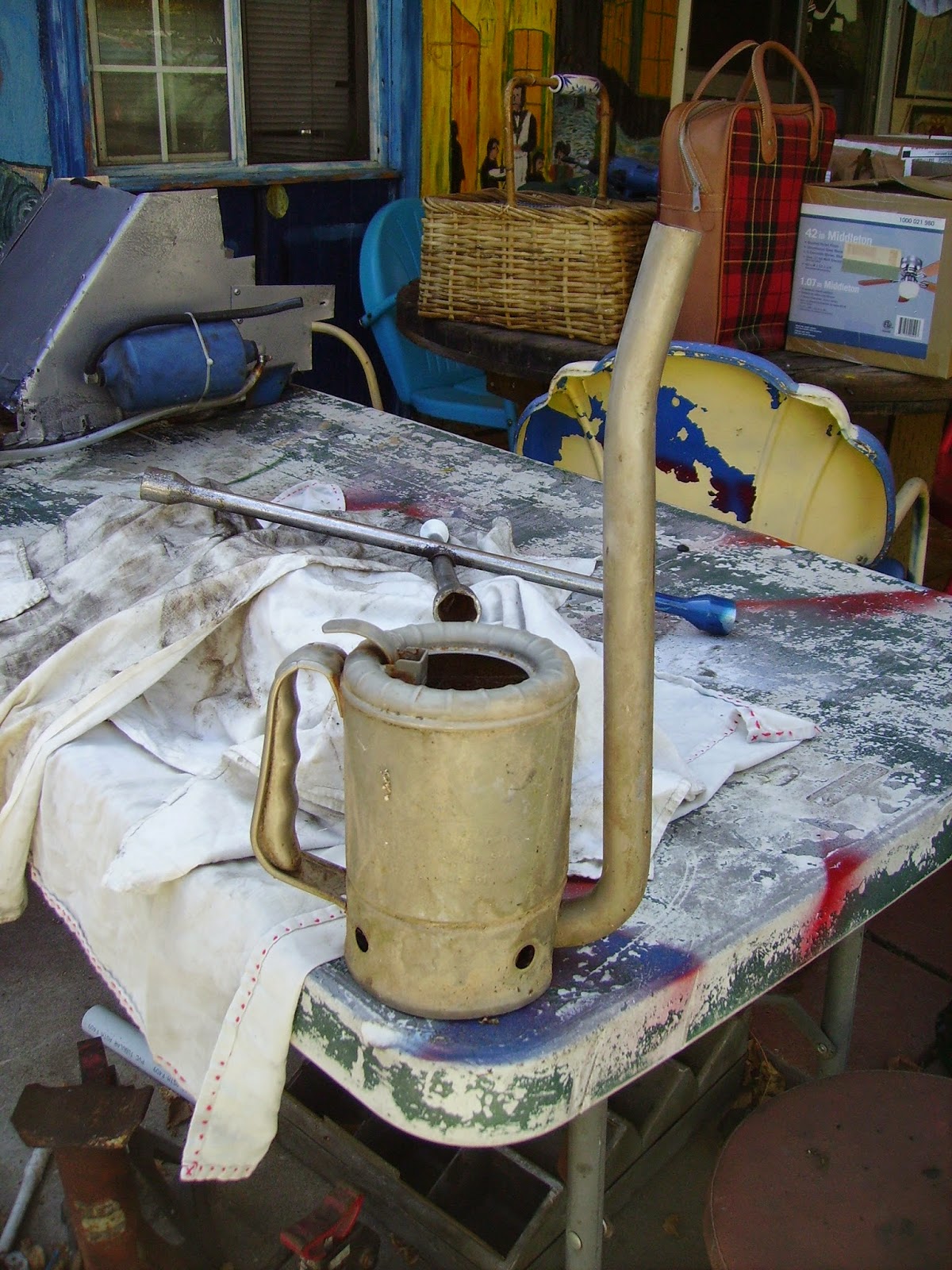 The car came from a stash of Citroens that have been sitting in the desert for upwards of 25 years. This guy had a Citroen dealership in Santa Monica, and when it went legs up, he hauled all his stuff out to a place in the desert, hereafter called Area 52. He also began buying Citroens from anybody and everybody. In all he had some 40 cars! Well, the poor guy died not long ago, and his wife has finally decided to offload the stuff. Wally has kinda overseen some of it, and that’s how I came to have a DS Wagon. Almost all the cars are gone now, only a VERY scruffy SM, a 2CV (spoken for), a DS (also spoken for) and a tempting Traction. AND there is a hanger and three shipping containers full of Stuff. 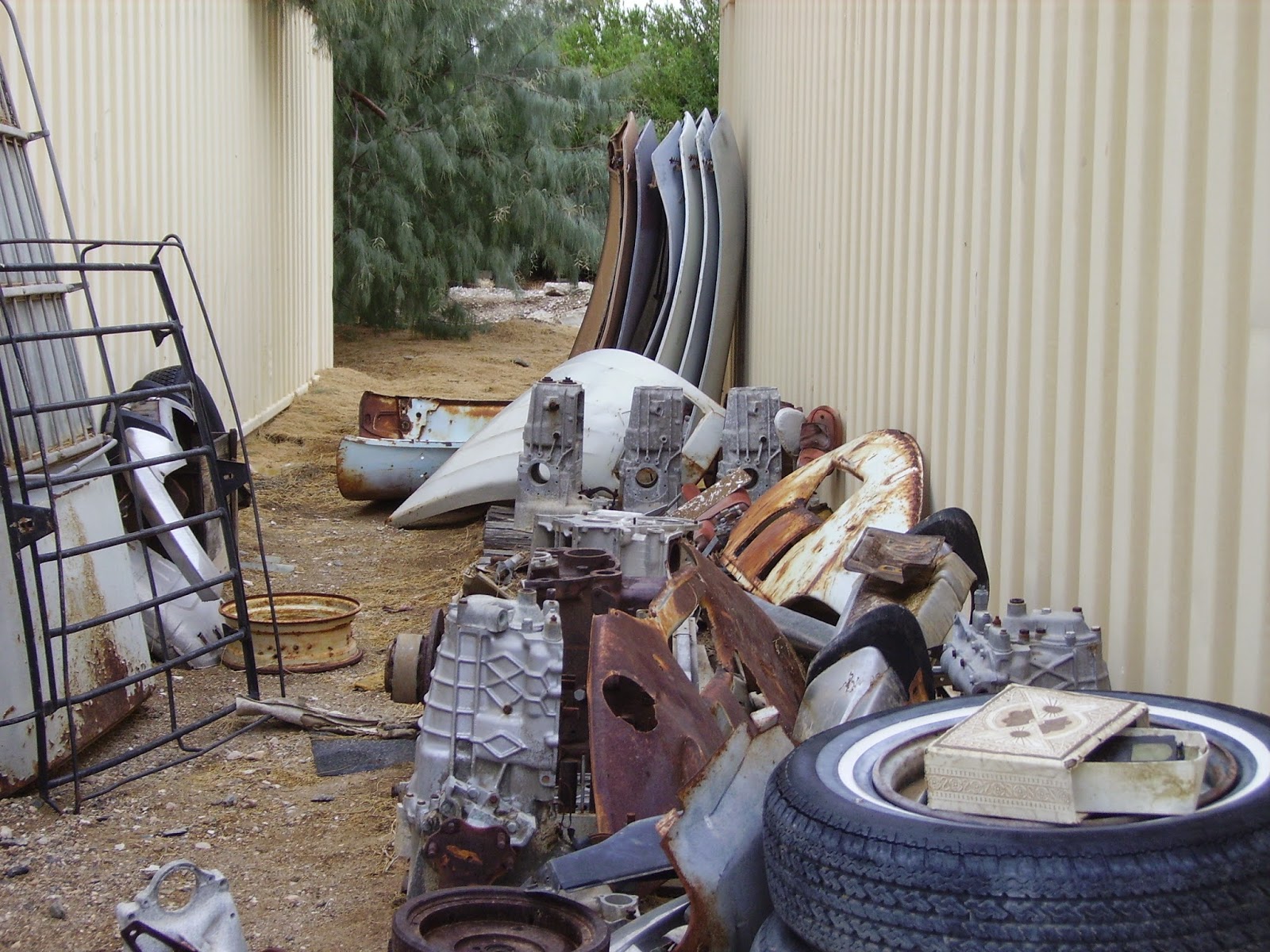 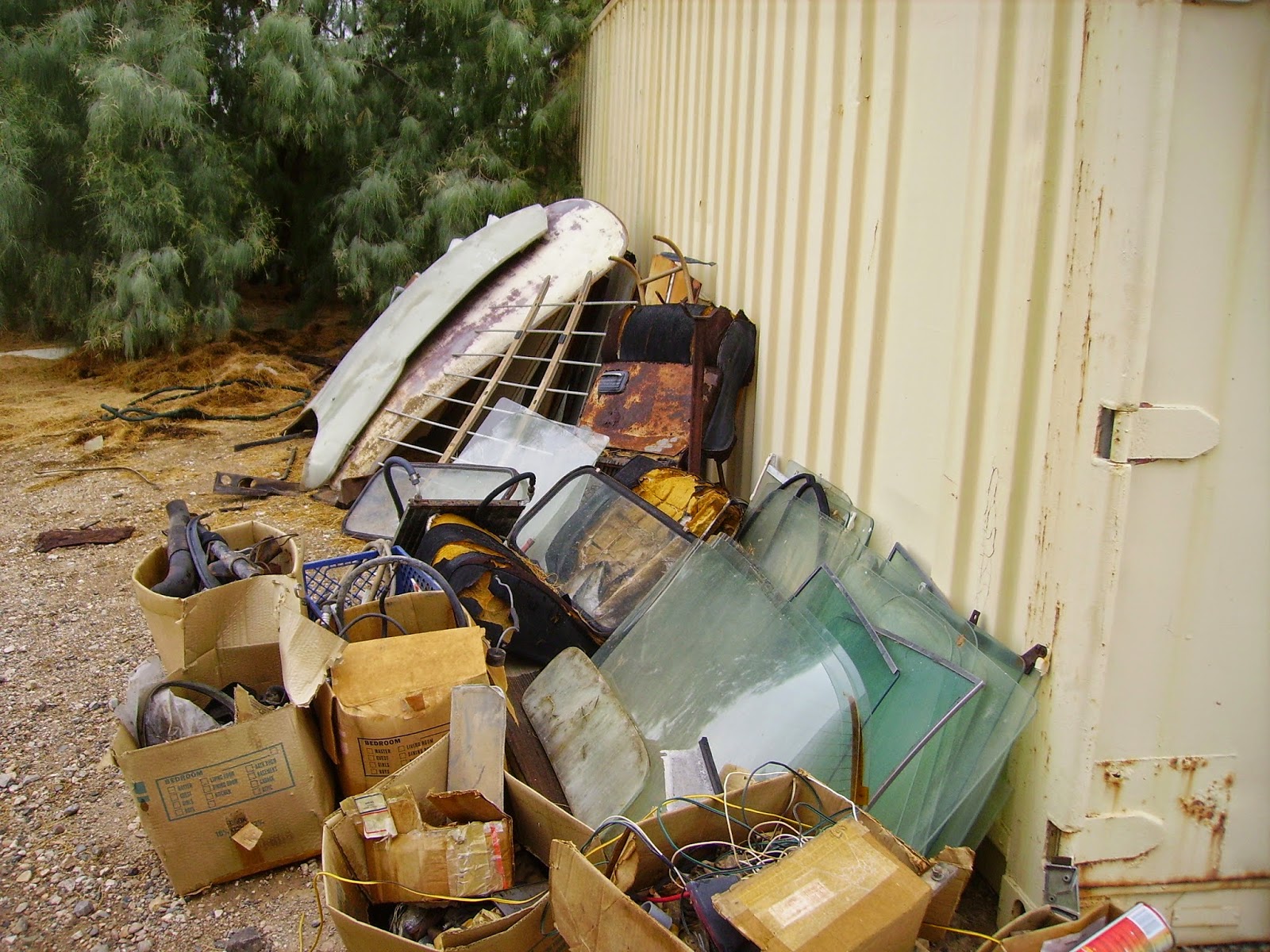 So, I got word that Chuck and Company were headed out there, and would I like to come along? Well, hell yes! The idea was to leave at the butt crack of dawn, drive to Redlands to get Wally, then out the I-10, up and over the Hill to 29 Palms, then Amboy, then hit Area 52. Well, we didn’t leave Monrovia until 7:30 or so. Ah, well, it’s not like there was a deadline. We got Wally and headed east, then north, then east again. Up a graded gravel road, we pulled into The Place. Lisette, the wonderfully French lady and executrix of the estate was there to meet us. With bad news. 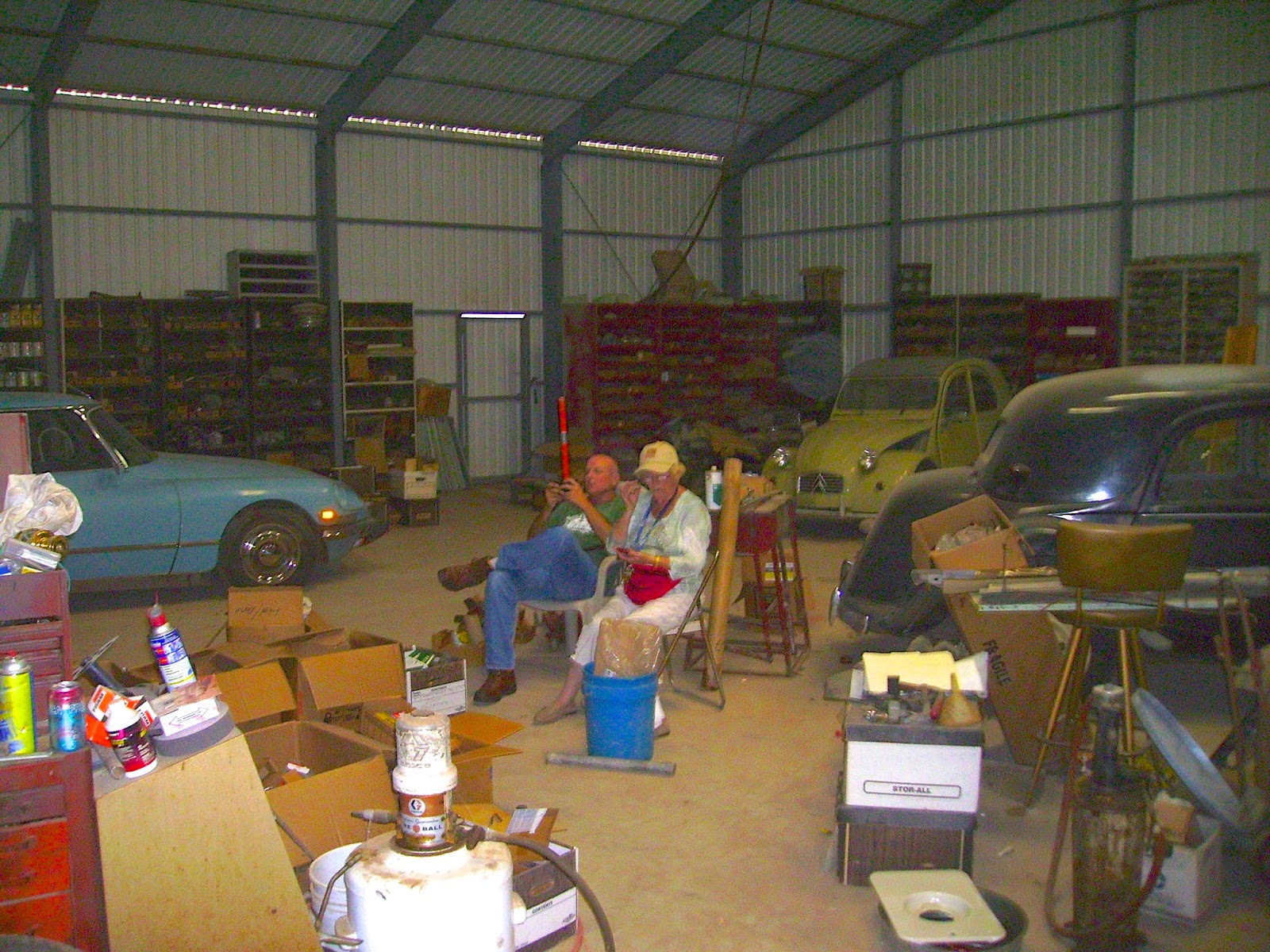 Seems the thunderstorms that were swirling around us sent a lightening bolt that knocked out her power. Bummer. Then we realized that the door to the hanger, where the decent cars were stored would not go up! No way, short of dismantling the 2CV would we be taking a car out of there. Unless we wanted the SM. She might have even just GIVEN it to us. We looked at it. It was worth every penny of Free. Ah well. As tempting as it was, I for one, was under STRICT ORDERS to NOT bring any cars back! So, I was a good boy. 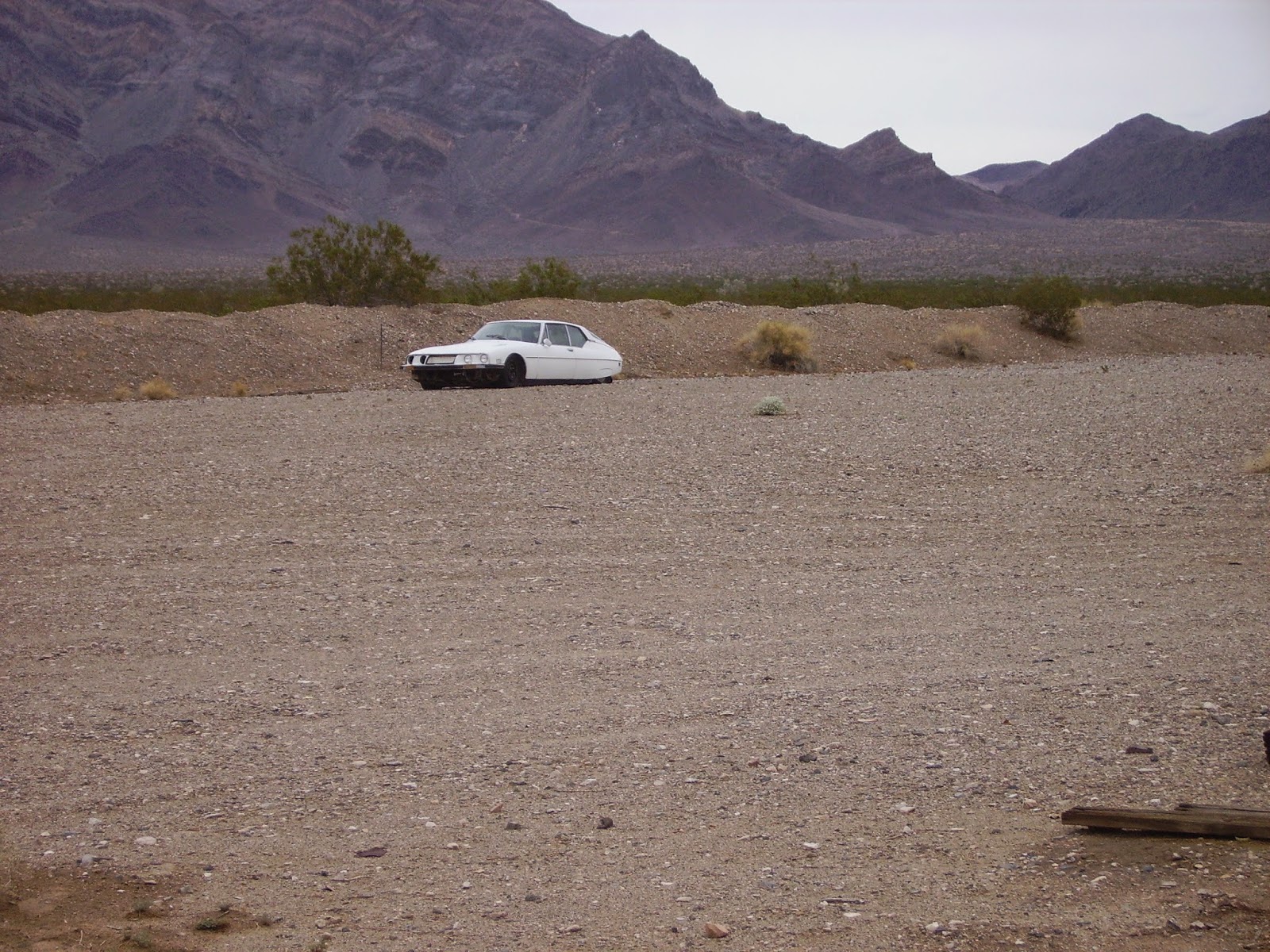 We probably spent a good five hours picking through stuff, each finding a few treasures. Lisette kindly made us lunch but aside from that, we dodged spider webs and rat crap to find more Stuff. The one thing I really wanted was a turn signal switch. Mine is busted. They all seem to be. That’s why there aren’t any. Anywhere. Sigh.
So, that brings us back to the shot as we approach Amboy, wind our way to the bustling miniopolis of 29 Palms and maybe some dinner. Whipping out Smart Ass Phones, we found a place called The Rib Company. It smelled right and was decent. I’ve had better ribs, but I’ve had worse. The fire roasted jalapeños stuffed with cheesy bacon were VERY good. Finally fed, we headed back, hitting Monrovia about 11PM.
Long ass day. But a day of cameraderie, cars, and junk. What more do you want out of a Road Trip?
Posted by stivmac at 1:43 PM 2 comments: