Pismo, a Real Beach of a Town!

Road Trippin’
with Steve McCarthy
Marianne and her sister Peggy (no, she doesn’t work for some credit card customer service) took their own Road Trip last month. By themselves! Women can actually do this with no muss or fuss. All that crapola about Women Drivers is about as accurate as thinking that Real Men don’t eat quiche. Out dated nonsense at best.
They were off to visit their aunties, one in Clovis (up near Fresno), one in Saratoga (up near San Jose) and then down to Peggy’s favorite spot, Pismo Beach. Mostly they kept to I-5/99, then over Pacheco Pass ( a pretty nice drive) then down 101 (which is always a nice drive). Our daughter Meaghan and I went up to meet them in Pismo. After lunch, Meaghan and Peggy went home and I stayed a night with Marianne there, benefitting from Peggy’s vast knowledge of one of California’s Classic Beach Towns.
Although Pismo and the other four cities (Grover Beach, Oceano, Arroyo Grande, and Halcyon) have grown together to make their own Mini-opolis, Pismo still retains a lot of the character of a proper Beach Town.
And what, may you ask, are the requirements for Classic Beach Town status?
Well, Number one, there has to be a beach. Pismo has it, several miles of it, good surf, and the bonus of being able to dig your own clams! Pismo clams!
Second, a Pier. Almost every proper Beach Town has a pier. Newport, Redondo, Huntington, Santa Monica, hell, even little ol’ Cayucos all have piers. Great for fishing, strolling, or just watching the ocean. What  is this fascination humans have with watching the ocean? Some Primeval Urge to connect with when we crawled out of the water and walked on dry land? A Freudian Fetish with the surging rhythm of the crashing waves? We all seem feel calmer, more peaceful at the water’s edge.
Third, there has to be funky happy-crappy stores that all sell the same t-shits and sweatshirts (OK, “hoodies”) emblazoned with the name of said Beach Town and way over priced. Of course if you’ve ever planned for a nice warm day in the sun and been confronted by a summer fog bank, what ever price they want for a sweatshirt is well worth it. These same shops also have to sell Things Made of Sea Shells. Shell covered boxes, shell covered hanging dust catchers, shell covered Thingys and shell covered Stuff. None of this stuff is of course made locally, or even in the US of A. Pismo has this in abundance, right down to the also obligatory Blown Glass Shoppe. Oh, and Salt Water Taffy! Ya gotta have a bag of this tasty, sugary, sticky confection, and in Pismo, Tomasko’s is THE place. Taffy by the barrel full. Enough to pull every filling our of your head and make you love it!
Fourth, is of course, Food. Lots of Beach Food! This is something that Pismo really shines at. First, there is the Holy Trinity of Eateries. Mo’s BBQ, the Splash Cafe, and best of all, Brads. Not only are all three on the same street, Mo’s and Brad’s are next door to each other, and Splash is across the street. All three have lines down the sidewalk any where near meal time and all three are worth waiting however long it takes to get seated.
Mo’s is a great place for Que! They have their own open pit, and make their own sauce. They tend to like Southern style, offering Southern, Carolina, and Georgia as well as their standard sauce. This is not the Kansas City smokey stuff, this is sweet and fruity. Don’t be a One Style Que Fiend! There are indeed lots of different styles, all of it good. Mo’s is exceptional! http://www.smokinmosbbq.com/ 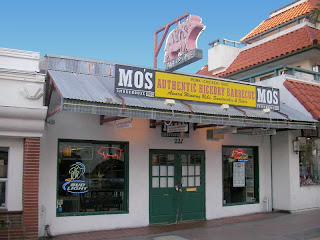 Splash Cafe is the new kid on the block. They date from 1989. They claim to have the best chowder ever, and indeed it is good. Thick, hot, creamy (none of that fako Red Clam Soup that Manhattanites tout, this is the REAL DEAL), and wonderfully filling, this is great stuff. The stuff of legends. http://www.splashcafe.com/ 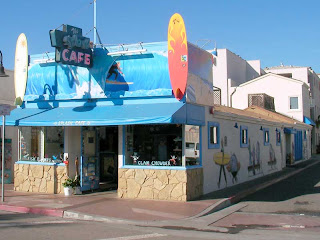 Except for the fact that Brad’s is across the street. Now Pismo is a Two Chowder Town. Residents and visitors divide into Bradites and Splashians and polarize over this issue to a degree that makes the California Legislature look like the Soul of Compromise, Cooperation, and Brotherly Love. I’ve tried both. Several times. I really like Splash’s. I LOVE Brad’s! It has the sweetest clams I’ve ever had in a chowder. It’s almost thick enough to stand your spoon in. It has the perfect clam to potato ratio, every spoon full has both. The dusting of paprika on the top adds just a hint of smokiness and heat to push this chowder over the top into the realm of Ambrosia. 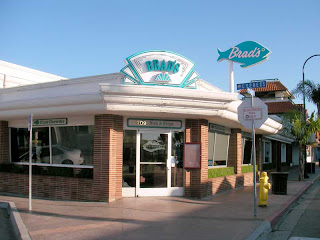 The rest of the food isn’t half bad either! We split the Seafood Combo and Chips. It was crisp and not greasy, even the large hunks of fried up calamari were tender and tasty, No mean feat that. Too often, calamari  is a plate full of rubber bands. On top of that, the staff (thanks for a great meal Grace!) is attentive and friendly. Well worth the 15 minutes we waited in line to eat. Don’t let that turn you off, like I said, all three have lines, a testament to their collective excellence.
I got to speak with Amy, the manager about Brad’s and the story gets better. The place has been there 60 years, all in the same family! Brad opened it as a burger place, that place burned down and he re-opened it as a proper cafe, specializing is seafood. His daughters, Sherri, Gerry, and Mary Ann still put in a day’s work, and to top off everything, for the past couple of years, they offer a FREE Christmas dinner to any one who shows up. Turkey, Ham, Stuffing, the lot, no questions asked. I mean, how could any self respecting Road Tripper NOT support a place like this?
https://www.facebook.com/pages/Brads-Restaurant-Pismo-Beach-CA/178112068895609
Now these are not the only places to eat. There’s great Italian food at Giuseppe’s and a high end place called Steamers. Both are a nice alternative, especially if you are staying a few days. For lunch, drive over to Oceano to the Rock ‘n’ Roll Diner. This place is in two old railroad passenger cars and does a mean tri-tip sandwich.
No overnight stay in Pismo is complete with out the best cinnamon rolls ever. It you are used to that gloppy mess of corporate goo called Cinnabon, get your self to Old West Cinnamon Rolls!  These folks have the stickiest, gooiest, most tender buns you’ve ever bitten into (yeah, I know, pretty salacious for a family website!). You can get ‘em plain, iced, encrusted with walnuts, all manner of buns. All good! Their coffee is also better than GotBucks. 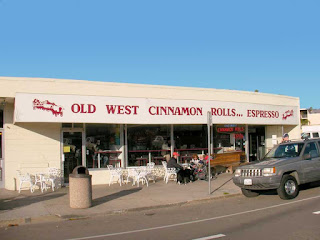 As with all Beach Towns, there are lots of motels, and even a classic Beach Hotel, the aptly named Pismo Beach Hotel, built in 1937, and nicely renovated. There’s every price range, from Motel 6 to luxury spa.
Pismo Beach is a neat town, plenty of great side roads to explore for day trips, close to wineries and plenty to offer the Serious Road Tripper, or even the casual mom-and-pop-in-the-mini-van-with-the-kids-and-the-golden-retriever. Get yourself up there and discover your own favorites. And by the way, yes Peggy, we got that set of glasses you were pining for in Paso Robles!
Posted by stivmac at 12:32 PM No comments: